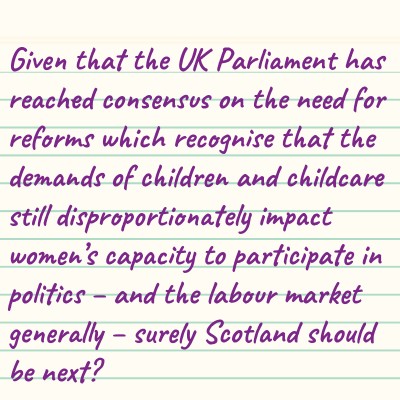 In the week that a year-long proxy voting pilot scheme was launched in the House of Commons, our Policy and Parliamentary Manager Eilidh Dickson reflects on what the move means for women and considers whether it's time for Holyrood to do the same.

Just this week Tulip Siddiq became the first MP vote by proxy in the House of Commons while on maternity leave following the birth of her second child. So aware of the importance of the moment, her colleague Vicky Foxcroft wrote ‘Tulip’ across her hand to make extra sure she wouldn’t slip up and forget to cast her colleague’s vote.

While Parliament has legislated to ensure access to maternity, paternity, parental, adoption and caring leave for UK employees, no such rights have existed until now for MPs. The system of ‘pairing’ enables parties to agree between themselves to match absent MPs with opposition Members to ensure that the absence of one (or more) of their number doesn’t affect the outcome of any votes. Paring relies on reciprocity and a great deal of trust – we’ll agree not to take advantage of your absence so that you won’t have the advantage in future.

Putting pairing agreements in place for periods of weeks and months that an MP opts to take as maternity or parental leave requires the professional trust to last that long. There was widespread concern and anger when Jo Swinson’s pairing deal broke down while she was on maternity leave last summer in unclear circumstances.

It also meant that MPs lost their rights to have a say on legislation and that their constituent’s views were not reflected in any votes that occurred during their leave. For this reason, Tulip Siddiq felt forced to delay the birth of her child to vote against the Prime Minister’s EU withdrawal deal earlier this month.

The Swinson and Siddiq cases have finally pushed parliament to vote (unanimously) to implement a 12-month pilot proxy voting scheme for MPs on baby leave. The responsibility moves from political parties to the Speaker, who authorises another MP to cast the proxy vote. Formalising the rights of MPs who are pregnant or on maternity or parental leave ensures that they do not have to choose between their baby and representing their constituents.

As parliaments slowly respond to the needs of the women elected to them, they have put in place different arrangements for elected members who take time off to have a baby, ranging from the full statutory parental entitlement available to Swedish MPs to the complete lack of arrangements in place in the UK. Baby leave is just one reform and others, such as changes to the House of Common’s sitting hours or the use of quotas for senior parliamentary roles, have been recommended to improve the gender sensitivity of its structures. But overwhelming support from MPs for the pilot and the debate itself in which they discussed the possibility of extending proxy voting to include other care responsibilities suggests that it’s a reform MPs recognise as long overdue.

While the Scottish Parliament took the early decision to adopt more family-friendly hours, no arrangements for maternity, parental, paternity or adoption leave exist, and, like the Westminster pairing system, parties have come to informal arrangements where MSPs have taken maternity and parental leave.

Given that the UK parliament has reached consensus on the need for reforms which recognise that the demands of children and childcare still disproportionately impact women’s capacity to participate in politics – and the labour market generally – surely Scotland should be next?