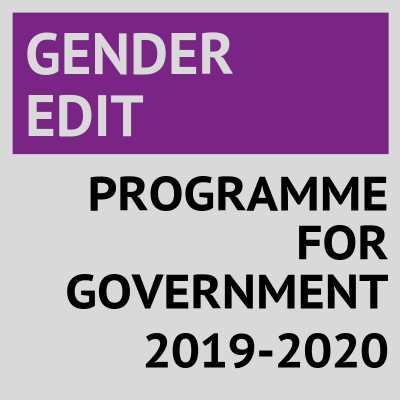 Yesterday the First Minister introduced the Programme for Government 2019-2020, setting out the planned legislative programme for the coming year. As usual, we've produced a 'gender edit' of the Programme for Government, pulling out the announcements which relate to the women and girls' equality in Scotland, and here Engender's Policy and Parliamentary Manager Eilidh Dickson offers some analysis of what it all means for the coming year.

Nobody could be blamed this week for their head being turned to Westminster, as MPs attempted to take back control of the Brexit Process, or even to the Court of Session where legal arguments raged concerning the planned prorogation of Parliament. In fact, the Scottish Parliament proved a reminder of normality amongst the fray, a bubble of policy focus as MSPs mentioned the constitution only briefly before returning to education, health, the economy and, significantly, the climate

The unveiling of the Scottish Government annual legislative programme was a muted affair, even as Nicola Sturgeon highlighted the ambition of her proposals to respond to the climate emergency that she had declared only weeks previously. The First Minister was clear that she sincerely hoped that her policy agenda would not be disrupted by matters elsewhere, but that economic and constitutional circumstances may impact upon ambitions.

I mention this all because what we are presented with in 'Protecting Scotland's Future: the Government's Programme for Scotland 2019-2020' is a largely business-as-usual programme for the upcoming year. While gender equality and measures to improve the lives of women and girls were front and centre of the upcoming agenda, there were few announcements that had not been previously committed to elsewhere.

The proposals from the First Minister’s National Advisory Council on Women and Girls’ first report have had a major influence on the year ahead. The Scottish Government had previously accepted many of these proposals in its response to the Council, but it is welcome that they have attracted priority for this upcoming year, and that they are so clearly rooted in the ideas generated by the women’s sector over the past decade.

These include the creation of a What Works? Institute to identify, test and promote best practice in changing public attitudes to and challenging stereotypes about women and girls’; a Gender Beacon to promote best practice in public bodies on developing gender competence and tackling women’s inequality; funding for Gender Equal Media Scotland, and an international event to look at how to advance women’s rights and co‑design gender equity measures. We are also pleased to see a commitment to support work to encourage 50/50 representation at elections.

The most significant new commitment is the establishment of a Women’s Health Plan, reflecting recommendations we made in our submission to the Scottish Government’s Consultation on a New Public Health Body over the summer. The Plan will “improve access to contraception and focus on reducing inequalities in health outcomes which only affect women such as endometriosis and improving services for women undergoing the menopause.” We’re hopeful that our recent research led by our intern, Elena Rodríguez Sánchez, into women in Scotland’s experiences of the menopause will be of use to this work.

It is to be welcomed that the Scottish Government’s previously announced support for perinatal mental health remains strong, however, we would like this to be expanded - ensuring that women’s experiences of mental health diagnosis and treatment are adequately reflected in Scottish policy and health services.

We are also pleased that the Scottish Government recommitted to a new Scottish Human Rights Act, and explicitly referenced the incorporation of CEDAW, something we called for last year with the launch of our options report.

In terms of legislation, the Programme includes a Bill on Forensic Examinations, taking forward some of the changes effectively advocated for by Rape Crisis Scotland, and a Hate Crime Bill. We believe that reforming hate crime provides a much-needed opportunity to introduce a misogynistic hate crime offence which recognises harassment and violence against women as a hate crime, and we will be continuing to make that case to the Scottish Government.

Several other commitments on violence against women are welcome as part of the implementation of Scotland’s national strategy, Equally Safe, which situates gender-based violence as a cause and consequence of women’s inequality with men and an abuse of human rights. Guidance for schools refreshed guidance on responding to forced marriage, a pilot to video-record rape complainers’ initial statements to police to be used as evidence later in a trial, and a consultation on commercial sexual exploitation are to be expected in the coming year. We will also see the previously announced working group on sex and gender data, which we hope will produce guidance to public bodies so that they can improve their collection and analysis of data about men’s and women’s lives and experience.

Other measures include the delivery of 30 hours a week of quality early learning and childcare. This falls below the recommendation of 50 hours per week from the National Council for Women and Girls, and we believe the Scottish Government should undertake more ambitious targets to provide flexible and wrap-around childcare which reflects the reality of paid work for many women. The Scottish Government will continue to implement its gender pay gap action plan, and referenced a range of measures to support women returning to work and to pursue apprenticeships. The Scottish Government will bring forward its Scottish Child Payment announced just before recess, having progressed over summer.

It is good to see the Scottish Government focus on gender equality maintained, but I cannot help but wish that some of the measures outlined had been more (pleasantly) unexpected. For example, the Scottish National Investment Bank referenced throughout the Programme presents an opportunity to reevaluate our understanding of the economy to recognise women, centre care as a valued key growth industry, and promote equality and wellbeing in its investments. These elements are still missing from the Government’s ambitions for SNIB.

Overall, this is a Programme for Government which reflects both the unsettled nature of Brexit, with its social and potential economic implications, as well as the truth that we are now entering the penultimate year of this Parliament. The Scottish Government has a number of commitments made to date - but yet to be implemented - that need to be addressed before the next election. As all parties begin to source manifesto commitments over the coming year, we should be aiming to build on the momentum so far and secure radical and forward-looking feminist commitments across the policy spectrum.