Opening the Pandora's box of women and festivals

With the furore over Glastonbury festival's women-only space dying down, find out about Scotland's first women's music festival

On July 16th 2016, Pandora Fest will launch Scotland's first and only Women's Music Festival, supporting women musicians and celebrating female musicianship across all genres. Taking place at DunCarron Medieval Fort in Carron Valley near Falkirk, the festival aims to redress the gender imbalance inherent within the music industry.

'In 2015 - the major festivals displayed a massive gender imbalance. Of the 87 acts that were announced, 78 were all male, 3 were female and 6 were mixed groups. That, was an 89.6% all male line up!' The Guardian Newspaper Music Section by Alexandra Pollard, Feb 2015

Pandora Fest is Scotland's first and the UK's premiere women's music festival. Festival organisers Caroline Daalmeijer and Jammenique Duchat, both lifelong musicians with a history of fighting against discrimination in the industry throughout their careers, decided it was time to take a long-overdue stand to fight back against the bias against women artists. In collaboration with Attack Agency, a record label promoting female artists and female led musical enterprises, and The Clanranald Trust for Scotland who raise funding for Duncarron through their educational activities and their work as combat performers for the film and television industries, Pandora Fest will be an event with a strong pro-female bias, welcoming festival-goers of all genders. 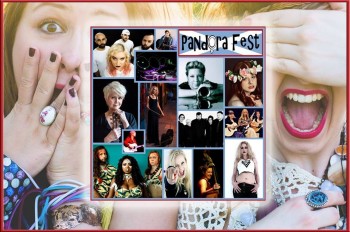 Pandora Fest will feature a diverse, global range of talent: from Californian Electronics artist ContainHer to the catchy prog-pop tunes of Texas singer Erin Bennett to Africa's mystery and the power of Voodoo, evoked by new rock/crossover sensation Vodun. Newcastle Electro-pop outfit Twist Helix are Spanish fronted, whilst the music of internationally acclaimed Dutch singer Mathilde Santing earned her a knighthood from the Queen of The Netherlands in 2007.

And of course Scotland is well represented by, among many others, rock outfit Bravado, Wolf Ruby, all-female funk band One More and pop singer Caroline Gilmour.

Courtesans headline, their head down, dark rock supported by a powerful set of London allies; Heel, Bugeye, Luci Monét, Sofia B and Firesign to name but a few. Pandora Fest's website lists all other confirmed artists with more to come.

Pandora Fest prioritises inclusivity and is fully accessible and family and LGBTI friendly; it will be running two stages of live music of all genres from 10.30am to 11pm and plans on becoming an annual event. Find out more here.

What do you think? Do we need women's festivals in Scotland? Members can comment below!