On The Engender - The Gender Recognition Act and Women's Equality 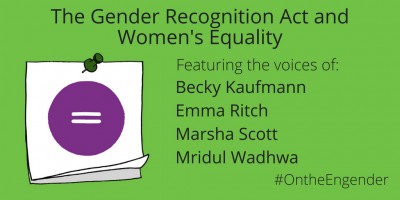 The latest episode of On the Engender is all about the Gender Recognition Act, and features Emma Ritch, Marsha Scott from Scottish Women’s Aid, Mridul Wadhwa from Rape Crisis Scotland and Becky Kaufmann from Scottish Trans Alliance. We know lots of people may not be totally up to speed with the Gender Recognition Act, the proposed changes, and the role of national women’s organisations, and we hope this is a helpful tool to help understand why we support the changes to the Act.

A couple of things really struck me during the podcast recording.

For me, one key takeaway from the discussion was what a small change the proposed GRA amendments actually represent (although of course hugely important for individuals), both in terms of legislation, and in what they mean for the operation of women’s organisations. Engender’s membership has been open to anyone who defines as a woman since a constitution change in 2014, and work done by Scottish Women’s Aid and Rape Crisis Scotland revealed that, far from reporting concerns about trans-inclusivity in services, workers were keen for further support to welcome and assist trans women.

This is echoed in Engender’s own experiences of consulting with women in Scotland. Over just the last few years, Engender has launched our Gender Matters Roadmap which involved a lengthy consultation process with organisations and individuals, produced manifestos for elections, held workshops for women on what they want from their local councils, met with countless groups of women campaigning in their local areas, and engaged with our members through weekly updates and annual general meetings. And throughout all of these various ways of engaging with women in Scotland, equality for trans women has been raised as an issue we should be working for.

Another key theme we cover during the podcast is how we can engage with online discussions in a way which enables rather than shutting down debate. We talk about the importance of radical kindness, of assuming the best of everyone, and of meeting people half way. This is all very easy to say, but much harder in practice. This is true both for individuals engaging in discourse online who feel their views are being ignored, or their identity threatened, and for an under-resourced organisation like Engender receiving persistent phone calls, emails and social media messages about the GRA from a handful of people who disagree with our perspective.

We know that the vast majority of people who are talking about the GRA reforms are doing so from a good place – wanting to ensure that women’s hard-won rights aren’t eroded, or responding to the violence faced by the trans community. But so often the debate becomes polarised, and in doing so loses all traces of nuance, and the opportunity for a fruitful discussion of gender, identity and rights. And of course for those discussions to be meaningful, they will take a huge amount of time, energy, resources and good will.

Hopefully this podcast can help kick-start some of those discussions, and we hope you enjoy it! As always, let us know what you think on #OnTheEngender.