On the Engender: Women in Scotland's criminal justice system 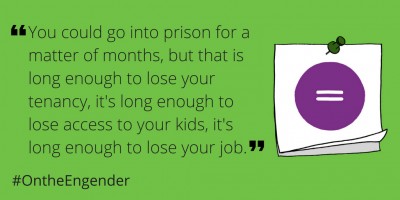 This month I was privileged to host our podcast recording on women in the criminal justice system. Even though Scotland incarcerates more women than almost any other country in Northern Europe, this is an area which I’m ashamed to say I hadn’t given much thought before working for Engender*.

Engender’s Policy and Parliamentary Manager Emma Trottier has a wealth of experience working in the criminal justice system in the UK and in Canada, and we were really pleased to devote an episode of On the Engender to this topic. As well as Emma, we were joined for the podcast recording by Anne Pinkman from the Prison Reform Trust, and Kim Long who has worked with the project Vox Liminis.

Throughout the podcast we touch on a host of issues relating to women in the criminal justice system including the absurd situation of remand in Scotland, which sees women imprisoned before they have been convicted of a crime (70% of women on remand are later released without being given a custodial sentence), the benefits of community-based sentencing, and the gender inequality which is at the heart of the vast majority of women’s offending.

One thing that struck me during the podcast recording was how the issue of women in the criminal justice system touches on pretty much every other issue we have discussed during our podcast series so far. We talked about the links between violence against women and women who come into conflict with the law - half of women in prisons in the UK reported experiencing domestic abuse or abuse during childhood. We discussed the lasting impact that a mother’s imprisonment has on both her and her children, as women are still the majority of carers in Scotland. We explored how poverty is a factor in women’s offending, and how the social security system isn’t fit for purpose to support women leaving prison.

We only scratched the surface on many of these issues and, as Kim says in the podcast, we didn’t even get round to discussing the huge stigma faced by women involved in the criminal justice system, so this is definitely a topic we’ll be revisiting in future. I hope you enjoy listening to the podcast – let us know what you think on twitter using the hashtag OnTheEngender, or members can leave a comment on this blog.

To find out more about women in the criminal justice system in Scotland, check out this blog from Emma Trottier, and this report from the Prison Reform Trust.

* And going to see the phenomenal production of Key Change during the Edinburgh Fringe Festival, which was written in collaboration with women prisoners. If it tours again, it’s definitely one to check out!