On the Engender: why gender budgeting matters 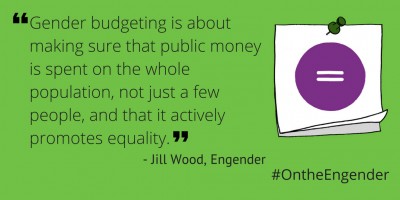 Most women care about gender budgeting; we just don’t call it that. This spring I’ve been chatting to women around Scotland as part of our work on women's rights, through webinars, workshops and our online survey. And throughout these discussions, whether it’s questioning why Glasgow council decided to increase childcare costs by 57% this year, talking about the poor public transport links in Aberdeen, or celebrating the recent initiatives to tackle period poverty in Dumfries and Galloway, money has been on our mind.

Gender budgeting, which is the focus of our latest episode of On the Engender, is about analysing the spending decisions of governments, councils, and other institutions to see how they impact on different genders. It’s about making sure that public money is spent on the whole population, not just a few people, and that it actively promotes equality. As Jill Wood, Engender’s Policy Manager, says in the episode, gender equality is a legitimate political goal, and one which can’t be achieved without budgeting which recognises that the status quo advantages those most privileged in society.

We often hear that the money simply isn’t there for the things we know are needed for gender equality – for a social security system which truly provides, for sustainable and well-resourced violence against women services, for more accessible care, for women’s health services, and for redesigning the systems that we encounter every day and which are not built around the needs of women. But deciding what money gets spent, and where, and how, is a political decision, and one which reveals and awful lot about the priorities of those in power.

Unless we are talking about household management, which still falls largely on women, we are taught to believe that budgets and tax and finance are not for us. That we couldn’t understand them even if we wanted to, and these decisions should be left to those (men) who will take care of it for us. But a budget represents the will of those in power, and if we want to influence change, we have to engage with it. Gender budgeting is a great way to start and, like most things gatekeepers are keen to keep women out of, it's really not that complicated.

We hope you enjoy this episode of On the Engender, which you can listen to below. If you’re inspired by the discussion, you can find out more about the Scottish Women’s Budget Group and sign up as a member here.