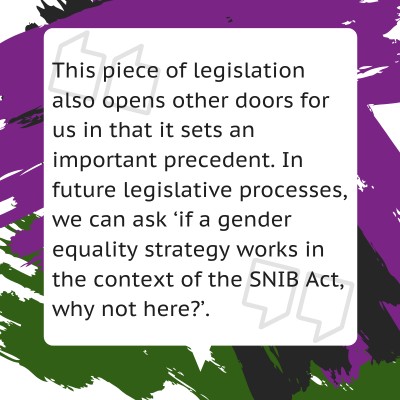 Last week, the Scottish National Investment Bank Bill was passed at Holyrood, and we were delighted to see the culmination of work by ourselves and Close the Gap in securing amendments which integrate women's equality into the Bill. Today we have a guest blog from Ruth Boyle, Policy and Parliamentary Manager at Close the Gap, celebrating success in gendering the Bill and exploring the process of building gender equality into a piece of legislation.

Facilitating changes in policy can be a slow process, and it’s often very difficult to measure your impact and success. So, when your advocacy has a clear and tangible impact, we don’t think it should pass without note!

Over the past few months, Close the Gap has been working closely with Engender to promote the importance of building gender equality into the design of the Scottish National Investment Bank (SNIB).

Traditionally, economic development agencies have not incorporated women’s specific needs and have not prioritised women’s equality. Consequently, the gender pay gap remains at 13%, and if numbers of women-led businesses in Scotland increased to equal those of men, it would lead to a 5% increase in GDP, equivalent to £7.6bn. We thought the SNIB Bill was a chance to do things differently.

Last week, the legislation to create the Bank was passed by the Scottish Parliament. Importantly, and very excitingly, Close the Gap and Engender’s six key asks are contained within that piece of legislation. We achieved:

1) An additional ancillary object relating to equality and non-discrimination;

2) The Bank’s vision statement, which had been articulated in the Implementation Plan, is now on the face of the Bill thus giving permanency to the more ambitious and transformational aspects of the Bank;

3) The mission setting process has been refined, meaning that Ministers will have to consider how missions will further equality;

4) The Bank is required to publish and review a gender equality strategy;

5) The Bank must gather intersectional gender-disaggregated data on its investments, programmes and services, and report on its progress against the Gender Equality Strategy; and

6) The Bank is required to carry out a regular equal pay review.

That the Bill was changed to include all of these amendments is a big success and will have positive impact on women’s experiences of working within the Bank, the Bank’s gender pay gap, and women’s wider social and economic equality in Scotland.

That the Bank will be required to carry out a regular equal pay review is a really positive development for the financial services as a whole, a sector that has been characterised by unequal pay and large gender pay gaps. Close the Gap research into employer reactions to the pay gap uncovered employer complacency, with less than a third undertaking an equal pay review or having any plans to do one in the future. The Bank will not be able to be complacent about potential discrimination in its pay systems.

How did we get to this point?

Our work on the Bank started in November 2017, when Close the Gap joined together with Engender, the Scottish Women’s Budget Group and Women’s Enterprise Scotland to produce seven principles for a gender-competent Scottish National Investment Bank.

This has been a multi-pronged approach to advocacy that’s seen us write numerous briefings, respond to three formal Government consultations, meet opposition MSPs, Cabinet Secretaries, and work with the Bill team. We had the support of Jackie Baillie MSP, who lodged our amendments and spoke eloquently about the need for gender equality to be at the heart of the Bill in committee sessions and in the chamber.

Before the Bill was even introduced, in line with the recommendation contained within Scotland’s gender pay gap action plan, A Fairer Scotland for Women, we were working with Government officials on the equality impact assessment. At stage 1, we provided briefings to MSPs which outlined our ambitions for the Bill. We also tried to build alliances across the third sector, working with SCVO and Social Enterprise Scotland to give a stronger voice to our gender equality messages.

At stage 2, Jackie Baillie brought amendments to the Bill at the Economy, Energy and Fair Work Committee. We made some good progress against our objectives at this stage with changes to the mission setting process agreed, the vision being added to the Bill along with an equality and non-discrimination objective, albeit with compromises on wording.

Crucially, we also achieved verbal commitments for the Cabinet Secretary to work with us ahead of stage 3 to discuss the opportunities for further amendments. This meant more briefings and meetings ahead of stage 3, working with various stakeholders to draft robust amendments pertaining to the gender equality strategy and equal pay reviews. This was difficult because there was not a precedent for some of our ambitions in pre-existing UK legislation. For example, lawyers had to establish wording for intersectional data.

On Tuesday 21st January, our remaining amendments were agreed in the chamber at stage 3. Encouragingly, we were pleased to see that all parties supported integrating women’s equality into SNIB, with three of the amendments passing without a vote.

Accountability on gender equality has been built into the Bank. Along with parliamentarians, Close the Gap and Engender will continue to scrutinise the work of the Bank, ensuring that they bring forward an ambitious and robust gender equality strategy. The intersectional gender-disaggregated data which will be gathered by the Bank will also provide valuable insight into the experiences of different groups of women in accessing finance and working within financial institutions.

This piece of legislation also opens other doors for us in that it sets an important precedent. In future legislative processes, we can ask ‘if a gender equality strategy works in the context of the SNIB Act, why not here?’. If the Bank can carry out regular equal pay reviews, why can’t the other economic development agencies? With these asks in mind, keep an eye out for our forthcoming Gender Pay Gap manifesto ahead of the 2021 Scottish Parliament election.

Policy change can be slow and long-term, so we were delighted to see the Bill pass last week. Now we are looking forward to working with the Bank to realise the possibilities that have been established with the passing of this legislation.

This blog was originally published on the Close the Gap blog, which you can find here.