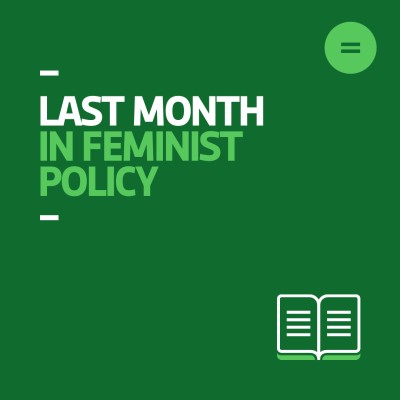 Our Bodies, Our Choice - standing up for abortion rights

News from the US this week about a possible major rollback of women’s reproductive rights is deeply alarming. Access to safe abortion is a human right and is fundamental to how women experience their economic, social and health-based rights and how they access employment, education, and resources. It’s crucial that lawmakers recognise and safeguard the reality of abortion as healthcare - that it is vital, safe and one of the most routinely used medical procedures by women across the world. In the last 25 years, 50 countries have moved to amend their laws to improve access to abortion. The US risks moving against the tide of history and science. We've included some timely writing on abortion in our round-up of articles below, including work from Mona Eltahaway and Jessica Valenti, as well as a republished piece from the 70s Italian feminist group Movimento di Lotta Femminile di Padova.

Here in Scotland, abortion remains within the criminal justice system and we are still awaiting a decision from Scottish Government on whether telemedical services introduced during the Covid-19 pandemic, which provided improved access and reduced waiting times, will remain available long-term. You can read our submission in support of retaining telemedical access online here. The news from the US has also prompted growing calls to implement buffer zones around clinics which provide abortion services in Scotland due to increasing levels of protest outside hospitals in Glasgow and Edinburgh. We've created a quick breakdown of the importance of abortion and work on women's reproductive rights over on our Instagram, which you can check out here.

On Thursday, the Scottish Government confirmed that measures introduced during the Covid-19 pandemic allowing women to take both pills required for an early medical abortion at home will remain in place, bringing Scotland in line with England and Wales. When the Scottish Government consulted on access to remote abortion at the end of 2020, we joined with BPAS and Amnesty International to call for these measures to remain, enabling women in Scotland to make the right choice for them regardless of geographic, economic, or social constraints. Since then, we have joined with women's organisations across Scotland to write to Maree Todd MSP, Minister for Public Health, Women's Health and Sport to reinforce these calls, and so we're pleased to see this commitment from Scottish Government.

Also this week, following calls from Monica Lennon MSP and abortion rights campaigners, First Minister Nicola Sturgeon committed to hosting and chairing an emergency summit meeting on buffer zones and abortion healthcare. In the wake of news from the US last week about the potential rollback of women's reproductive rights proposed by the Supreme Court, concerns have been raised about protests and 'vigils' outside healthcare facilities in Scotland which provide abortion services. Abortion is safe, necessary healthcare accessed by 1 in 3 women at some point in their lives, and harassment of women seeking healthcare is a clear violation of women’s rights.

On The Engender: Misogyny - a Human Rights Issue, Pt. I

Today we've released the latest episode of On The Engender, Scotland's feminist policy podcast. In the new episode, hosts Alys Mumford and Amanda Aitken are joined by Engender's former Policy and Parliamentary Manager Eilidh Dickson, for the first part of a discussion on the final report of the Misogyny Working Group, which Engender sat on, and which was led by Baroness Helena Kennedy QC. When the report was released in March, Eilidh wrote for our blog on using the law to tackle misogyny in Scotland, which you can read online here.

You can listen to the new episode online here, and remember to subscribe wherever you get your podcasts so that you don't miss Part II, which will be released soon. A transcript of Part I is available here. The final report, Misogyny - a Human Rights Issue, reflects much of our perspective on the deeply ingrained and normalised misogynistic attitudes and behaviours that are based on entitlement to women, their bodies, attention and capabilities and recommends a holistic approach. You can read the report online here.

Tackling sexual harassment in the workplace

Last month, we published our report Enough is Enough: Tackling Workplace Sexual Harassment in Scotland, which sets out the extent and nature of sexual and sexist workplace harassment and the impact it has on women in Scotland and highlights the need to reframe this as an issue of women’s equality that is rooted in sexism and sits within the spectrum of violence against women and girls. You can read the report online here.

We were pleased to be joined in parliament last month by a number of MSPs to talk about the report and the recommendations it makes for action on sexual and sexist harassment in the workplace for Scottish Government and other bodies. We're also grateful to Emma Roddick MSP who submitted a motion welcoming the publication of the report which you can see here, along with a list of MSPs who have supported the motion. Roddick also recently submitted a written question to the Scottish Government on on sexual harassment as a health and safety concern, and you can see it and the Government's response highlighting their work on Equally Safe online here.