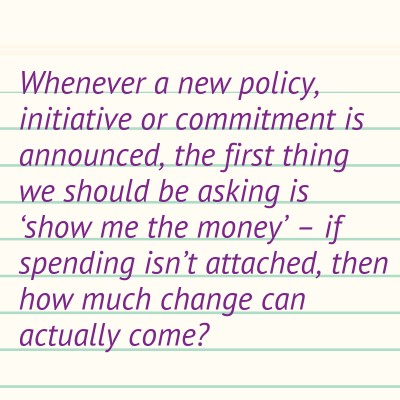 This week the Equality and Human Rights Committee of the Scottish Parliament will be hearing the first of two evidence sessions as part of their scrutiny of the draft Scottish Budget. The Committee’s scrutiny is focused on the link between Scottish Government’s equality and human rights priorities and what’s in the Budget.

Whenever a new policy, initiative or commitment is announced, the first thing we should be asking is ‘show me the money’ – if spending isn’t attached, then how much change can actually come? We must scrutinise not only what is in the budget, but also what has been left out.

In this draft budget, Engender is concerned about the gaps between Scottish Government’s ambitions for women’s equality and what is earmarked for spending. For example, Scottish Government has a commitment to ending violence against women and closing the gender pay gap, but it’s not clear how this is influencing spending decisions or decisions on how to raise revenue through taxes.

Scotland has often been held up as an example of good practice when it comes to budgeting for equality, and indeed we’re the only nation in the UK with an equality budget statement (thanks to the hard work of campaigners like the Scottish Women’s Budget Group). But that isn’t enough, and we’re being left behind by other European nations that have taken bolder steps to gender their budget processes.

Our written evidence to the Equality and Human Rights Committee calls for gender budget analysis to be integrated into the Scottish Budget process. This would ensure that public expenditure in Scotland is allocated in a way that reflects the needs of women and men and girls and boys.

You can read about the 2019-20 Budget and what it meant for women in this blog from Engender's Policy and Parliamentary Manager, Eilidh Dickson.