A decade ago saw the report from the Christie Committee, a ground-breaking inquiry which aimed to usher in a new era in public sector delivery in Scotland. To mark 10 years since the release of the report, our Executive Director Emma Ritch joined sector leaders in a special edition of Third Force News magazine to reflect on the Commission and progress made on its recommendations. 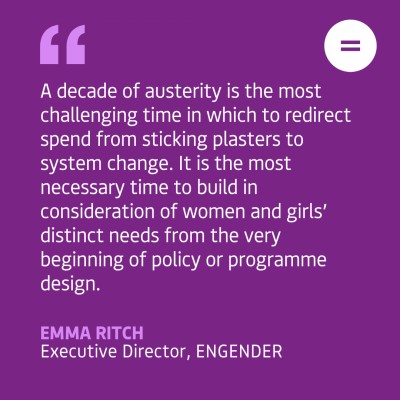 Christie finished its work just after the public sector equality duty came into being, and its critical focus on prevention really aligns with the duty.

So much of the inequality that women experience comes from laws, policy, programmes, and institutions that have missed the opportunity to get it right for women in the first place. Everything from transport systems to parks to health services are designed around the preferences and needs of boys and men. The consequences are dire: women in Scotland have less say in their communities, less power, less safety, and fewer resources.

The Christie report didn’t mention women at all but it did recommend that equality be integrated into the National Performance Framework. It also called for the public sector equality duty to be tooled to establish partnership working on reducing discrimination and advancing equality, and for public bodies to gather sufficient equality data to inform service design. We see relatively little evidence that any of this has been realised. Only two of the 81 NPF indicators relate directly to women and girls. The public sector equality duty has been a damp squib in terms of making change happen.

A decade of austerity is the most challenging time in which to redirect spend from sticking plasters to system change. It is the most necessary time to build in consideration of women and girls’ distinct needs from the very beginning of policy or programme design. When this doesn’t happen we see yawning gaps open up between the rhetoric of a progressive Scotland and the evidence of change in women’s lives, women’s communities, and women’s purses.

Christie warned that institutions will always try to protect themselves from change. We see evidence of that every day at Engender. We also know that women, public servants, activists, community groups, and academics have been inspired by Christie’s vision of institutional collaboration, prevention, and (crucially) handing over power to people and communities. For women’s sake, for the sake of all of us, we need to find a way to make that happen.

This blog was originally published alongside other reflections on the Christie Commission in the June 2021 edition Third Force News magazine, which you can read online here. You can read Engender's original submission to the enquiry in 2011 online here.