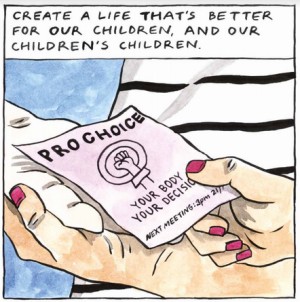 Engender is proud to host this guest comic from Grace Wilson and Jenny Bloomfield.

Of their story Life, they say:

"Life shows the not uncommon story of a woman from Northern Ireland travelling to England to access abortion.


"When we wrote Life early last spring, we had no idea that abortion on the island of Ireland was going to hit the headlines in quite the way it has. And whilst there have been political commitments to improvements for women, the reality is still a long way from local access to safe services.

"We hope that Life serves as a small reminder of the need for this continued fight. We hope that in future years, such a story will not need to be told."

Life is Jenny and Grace's first collaboration. Their second, a humorous short story called The Life and Times of Mhairi Black, will be published in We Shall Fight Until We Win by 404 Ink & BHP Comics this summer.

Artist and writer Grace Wilson has published graphic novel Saving Grace with Jonathan Cape, a darkly comic commentary on the London housing crisis. More of Grace's work can be found at gracewilson.co.uk.


Writer Jenny Bloomfield is undertaking a creative writing MA at Edinburgh Napier University, whilst also working on a feminist thriller.

Read the comic below

(if you're reading on a mobile device you may need to zoom out, or you can open the full comic by clicking the arrow at the top right of your screen)