Engender has responded to the Scottish Law Commission's consultation on reforms to the law governing cohabitation in Scotland. This blog, from Engender's Policy and Parliamentary Manager Eilidh Dickson, sets out why equality in cohabitation is a feminist issue. 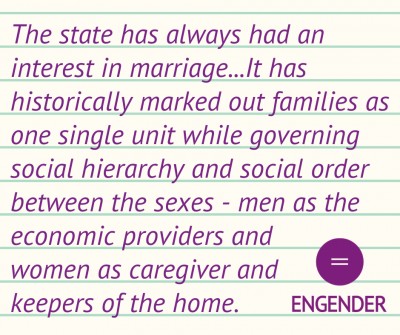 Earlier this year, the Scottish Parliament passed into law the Civil Partnerships (Scotland) Act 2020, which equalised the laws governing civil partnerships in Scotland, meaning that both marriage and civil partnership is an option for mixed and same sex couples. For many couples in mixed-sex relationships this new right to choose between forms of legal recognition for their relationship is a radical positive, offering an alternative to marriage with less ‘baggage’.

The state has always had an interest in marriage. Marriage has been and continues to be described as the ‘gold standard’ of relationships. It has historically marked out families as one single unit while governing social hierarchy and social order between the sexes - men as the economic providers and women as caregiver and keepers of the home.

However individual feminist women may feel personally towards marriage, there is no doubt that it is a profoundly different institution to the one we would have seen a century ago. Some of these changes have been located in the law. Historically, women had no right to own property, no access to legal system no right to own funds or property or right to consent to sex with their husbands until changes to the law introduced over the past century. Other changes have been driven by social revolution such as access to birth control and women’s entry into the labour market. Others are more subtle, such as the importance of shared surnames and family expectations.

Because the law marked out marriage as key to social order, it has had to change to maintain its relevance as societal attitudes and norms changed – from the Married Women's Property Act to the Marriage and Civil Partnership (Scotland) Act 2014. Encouraging couples into the status of marriage was socially and legally gendered – men were rewarded with status and promotions at work for entering into it, while women were actively punished for avoiding it with poverty, a lack of economic and sexual power, and even the threat of the loss of their children if attempting to leave it. (Considering our current 'F-words' blog series, we could also reflect on the language we apply to married and unmarried men and women – “bachelor”, “spinster,” “gold-digger” etc.)

Maintaining both the hierarchy between men and women and the hierarchy of marriage and other forms of household make-up means that the law has traditionally had very little to say to cohabitating couples. This isn’t a neutral position – the absence of regulation was its own normative proposition. In order to ensure economic protection, recognition of children and social acceptance, marriage was system the state actively ensured we relied upon.

Even as divorce became more socially available, marriage’s special status has been preserved through the regulation of asset sharing. When a couple decides to divorce in Scotland, their marital property is divided through a detailed regime laid out in the Family Law (Scotland) Act 2006, and its predecessor the 1985 Act. This regime is underpinned by five principles which can loosely be summarised as balancing advantages and disadvantages and fair sharing. This means that assets acquired during marriage are generally subject to an equal sharing, and disadvantages and advantages can be accounted for, at least economically.

Of course, this does not mean that asset sharing on divorce was or is a feminist endeavour, as discussed in the recent feminist judgement podcast episode examining the case of Coyle vs. Coyle. The inability of courts to recognise the value of childcare, the costs involved in legal proceedings, and the gendered stigma associated with divorce are all still issues which need addressing, but divorce is more regulated than separation of a couple who aren’t married. 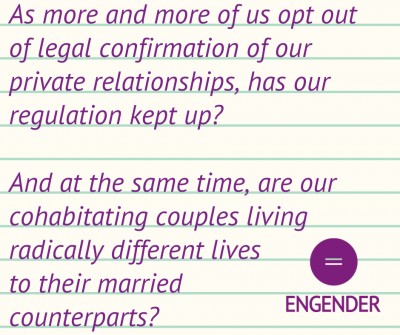 With short-term and life-long cohabitation on the increase, 17.6% of families in Scotland are now headed by a cohabiting couple. As more and more of us opt out of legal confirmation of our private relationships, has our regulation kept up? And at the same time, are our cohabitating couples really living radically different lives to their married counterparts?

While male-breadwinner female-care division in families is no longer our social default the reality remains far more complex. Women are still more likely to provide unpaid care, to give up work to provide care, to work part-time and Scotland’s overall gender pay gap is stubbornly persistent at 13.3%. While there is clear evidence that the earnings divide becomes more acute with motherhood, it also widens over women’s lifetimes where they do not have children, and pension inequality leaves women poorer into retirement. All of this means women are more likely to rely on their male partner for financial support. We only need to look at Universal Credit to see the ways in which the state still encourages a comingling of resources as part of an exercise in social control through the single household payment. This is true even when the couple are unmarried.

Research into Canadian cases showed that separating opposite sex cohabitants demonstrated highly gendered roles and contributions. No cases found by the researchers involved a male primary caregiver. While ‘breadwinning’ was less uniformly male it was still predominantly so, while childcare and domestic work was overwhelmingly carried out by women. Where families had relocated, the research showed that it was women whose careers had suffered.

So when opposite sex cohabitants do separate, they face the same gendered realties as married couples – men leave largely with their earning potential intact, while women have experienced a motherhood penalty, gaps in work, and remain responsible – sometimes even more so – for the care of children. Yet unlike divorcing couples, cohabitants are not protected by the principles of balance and fair sharing - the existing law in Scotland assumes that cohabitants have made an equal, proactive and lifelong choice to avoid the regulation of the state and therefore from financial obligations to one another. Many couples are unaware that they aren’t protected by law like their married counterparts, in part due to persistent but untrue belief that they are perhaps married under ‘common law’.

The Family Law (Scotland) Act 2006 did introduce for the first time basic rules for separating cohabitants. Section 28 of the Act provides two weaker principles based on “fair compensation” for economic advantages and the “clean break” of separation. The reality of a clean break where children or economic ventures remain entangled after separation is seriously questionable and it fails to account for the ongoing economic impacts of time taken out of the labour market. “Fair compensation” is significantly different from the “fair sharing” that underpins divorce and means that the current law protecting cohabitants cannot address prospective losses, imbalances and unfairness.

The Scottish Law Commission has recently concluded a consultation on reforms to the law governing cohabitation and you can read our response here. In it we describe the ways in which married couples and cohabitating couples similarly navigate a gendered landscape informed by a long history and conclude that couple’s actual lived circumstances must be the crucial factor and “no form of relationship is an easy shorthand for the degree of co-mingling and interdependence. Assumptions that cohabitants actively want to avoid the regime of marriage, and remain committed to this view throughout their relationship, clearly do not apply in every case.”

As Scotland embraces a future that understands that different forms of relationship work for different couples of any sex through the passage of the Civil Partnerships Act, so too must it examine why we’re embracing social change in our formalised relationships and not in cohabitation.