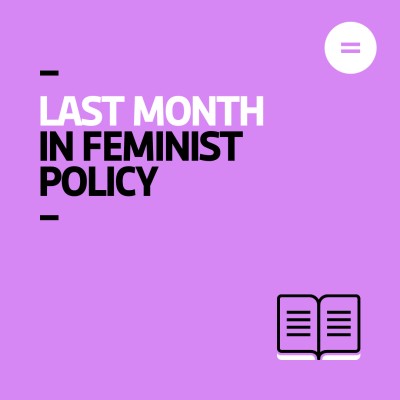 On Tuesday this week our Executive Director Catherine Murphy gave evidence to the Equalities, Human Rights and Civil Justice Committee of the Scottish Parliament alongside Rape Crisis Scotland, Amnesty International and JustRight Scotland about the Gender Recognition Reform (Scotland) Bill.

Across several years of extensive consideration, our headline finding is that the proposed reforms will not negatively impact on women’s equality and rights. Polarisation and inaccuracies in some of the public discourse around the Bill have unfortunately led to a perception that the Bill, and trans inclusion and rights more broadly, are fundamentally in conflict with the aims of women’s equality. Engender does not share or uphold this view. We are confident that reform will not have adverse effects on the capacity of the Equality Act 2010 and CEDAW to protect women from discrimination and advance women’s equality and rights.

We do not believe trans equality and women’s equality are in competition with each other. We see the paths to equality for women and trans people as being deeply interconnected and dependent on ongoing shared efforts to dismantle intersecting patriarchal systems of oppression that impose barriers to full equality. We therefore broadly support and welcome the provisions set out in the Gender Recognition Reform (Scotland) Bill. You can read our recent submission to the committee online here.

What do women need from a Scottish Carer's Assistance?

This week marks Carers Week, and it comes after two years which have shown, more clearly than ever, the vital role that unpaid carers play. The Covid-19 pandemic highlighted what half of the population already knew – that women take on the vast majority of unpaid care work, and that without them our society and economy could not function. Throughout the spring, we've held focus groups and surveys with women who provide unpaid care around Scotland to inform our response to the Scottish Government's recent consultation on a proposed Scottish Carer's Assistance.

You can read some of their responses highlighting why unpaid care is key issue for women's equality on our blog here. Unfortunately, like we see far too often, the Scottish Government consultation on how a Carer's Assistance might operate lacked analysis reflecting the gendered nature of care. Some of the proposals, in fact, reveal that far from recognising the importance of unpaid care, future plans from the Scottish Government will continue to take unpaid carers for granted. You can read our full response to the consultation online here.

Update from the European Women's Lobby

Last weekend saw women from across Europe meet (virtually) for the General Assembly of the European Women's Lobby. Engender was represented, as part of the United Kingdom Joint Committee on Women, by Jonna Monaghan from our sister organisation the Women's Platform in Northern Ireland. The General Assembly is a chance to hear what the European Women's Lobby has been working on, and to make key decisions about its strategic direction.

We heard more about the EWL's strategic plan for 2022-2026 which was launched earlier this year. The strategic plan sets out how the lobby will work to achieve its vision of "a Feminist Europe, in which all women and girls enjoy equal rights and participation in power and decision-making structures across all levels of society. Liberated from all forms of oppression and exploitation, women and girls have true freedom of choice, and live lives free from sexism and all forms of violence. Women’s contribution to all aspects of social, political and cultural life is recognised, rewarded and celebrated.", and you can access it here. We also got an update on the work the Lobby has been doing to increase women's representation on public boards, which will be discussed at the EU later this year - this wee video explains more.

Of course Ukraine was at the forefront of people's minds during the General Assembly, and we were pleased to support a motion expressing solidarity with women in Ukraine and Moldova. The motion to show our support by inviting Ukrainian and Moldavian Women’s Rights organisations to join EWL as members was passed overwhelmingly.