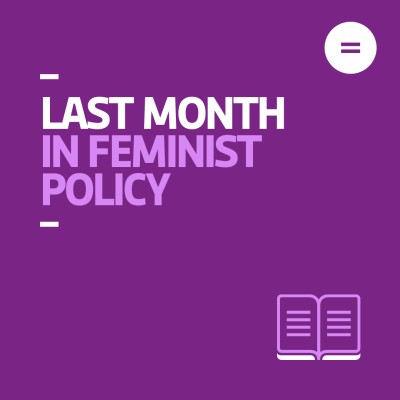 We all know that women are underrepresented at all levels of politics in Scotland, and that increased diversity in politics has a positive impact on all aspects of public life.

The current lack of robust, detailed and intersectional data on who our representatives are is a major barrier to progress in terms of gender parity in our political institutions at both local and national levels. As well as voluntary processes to gather this data, such as that done by Women 50:50 and other campaign groups, we’re pleased that Scottish Government have also revealed their plan to collect data on the protected characteristics of candidates standing for election.

Jessie Duncan, who runs our Equal Representation in Politics project, has responded to the Government’s plan – welcoming the intention, but making the case that such data collection should be mandatory in order to gather the most robust evidence. We hope that the introduction of a framework for collecting this data will be a crucial step in addressing the persistent inequalities which exist within political representation in Scotland. You can read the full response online here.

#ScrapTheCap: A campaign to end the benefit cap

Last month Engender joined the Poverty Alliance and over 45 civil society organisations to call on the UK Government to remove the benefit cap, which places a limit on the total amount of benefit payments a person or family can receive. As of May 2021, 190,000 households are affected by the cap, receiving on average £55 per week less in support than they would if the cap was not in place. There are a total of 6437 households currently capped in Scotland, and single parents with children (9/10 of whom are women) are disproportionally affected by the cap: 67.8% of capped households in Scotland are single parent households.

Women are twice as likely to be dependent on social security as men, and the way the benefit cap is designed means that those who require the highest level of support from the benefit system are the most likely to be affected. You can find out more about the campaign by reading the Scrap the Cap briefing online here, and get involved by sharing information about the campaign on social media and by contacting your local MP to encourage them to join in calling on the UK Government to remove the cap.

Equality and Rights in the Covid-19 Inquiry

Last week we co-ordinated a letter to John Swinney from 27 organisations working for equality and human rights in Scotland expressing our “dismay” and “deep concerns” following the publication of the Scottish Government’s Terms of Reference for a public inquiry into the handling of the COVID-19 pandemic in Scotland.

You might remember that last year we responded to the Scottish Government's 'aims and principles' for the public inquiry (read it here), and we were therefore so disappointed to see that the Terms of Reference as published make no reference to equality or human rights impacts stemming from the pandemic. Throughout the document, there is no mention of women, Black and minority ethnic communities, disabled people, LGBT+ People, older people, young people persons subject to No Recourse to Public Funds, and other groups who experienced the brunt of the pandemic.

Since then, we're pleased to see that Pam Duncan-Glancy MSP, the Shadow Cabinet Secretary for Social Justice has echoed our call for a human rights and equalities based approach to the inquiry, and we have been invited to meet with Lady Poole, the Chair of the inquiry.

Response to the EHRC letter to the Scottish Government

At the end of last month, the UK's Equality and Human Rights Commission wrote to the Scottish Government suggesting that proposed changes to the Gender Recognition Act be paused while more work is carried out. This is not a key area of policy work for Engender, but given our previous work on the proposed reforms and the Equality Act 2010, we felt we needed to respond.

You can see our response in a Twitter thread here, where we reiterate our support for the reforms, and ask the EHRC to urgently set out the legal basis underpinning the change in their own position (if this exists). We also link to the legal analysis independently commissioned and peer-reviewed, written for Engender by Professor Nicole Busby, and the recording of the webinar we held on the Equality Act just over a year ago