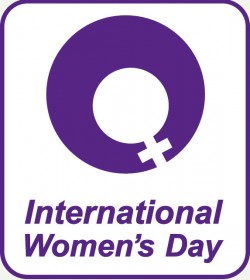 But what does being a working woman actually mean? Governments and international bodies tend to recognise work as something you get paid for. You offer your services, skills and time, and your receive a wage for it. This wage then gets spent on rent, bills, food and goods, and paying other people for services, and so the economy functions. This is what's known as the 'formal economy'. Things which are deemed not to contribute to the formal economy are normally counted as 'leisure'.

There are huge problems with the formal economy for women – we still (in 2015!) have a pay gap which means women earn 13% less than men as full time workers and 32% less than men part-time. Women are more likely to be in precarious and low paid positions. We are less likely to become CEO (in fact, if you're a man named John, James, William or Robert you're more likely to be CEO than a woman!) and are still discriminated against in the workplace. 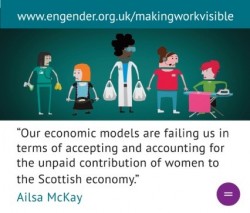 But perhaps the biggest problem with the 'formal economy' is that it doesn't recognise the value (economic or otherwise) of any work which doesn't fit into that rigid pattern of work-earn-spend. Work such as raising children, caring for relatives, housework and contributing to communities are not counted in budgets and figures such as GDP (Gross Domestic Product – the way which most governments measure economic activity), even though they clearly contribute to the wellbeing of the country. This sort of work is still predominantly done by women – 62% of unpaid care-givers are women, the majority of childcare is still undertaken by women, and the time men spend doing housework has only increased at a rate of one minute per day per year since the '70s!

Watch our brilliant new film 'Marginal-eyes' which highlights the problem of undervalued and unseen women's work!

Please help us spread the word about this important issue on Twitter and Facebook using the hashtag #makeworkvisible. We also have graphics highlighting the issue which can be found on our our Flickr page.