Last week marked the start of Incorporation Fortnight – a two week campaign led by the Human Rights Consortium Scotland focused on human rights incorporation and a new human rights law for Scotland. In this blog, our Policy and Parliamentary Manager Eilidh Dickson explores incorporation of CEDAW and what it could mean for women in Scotland. 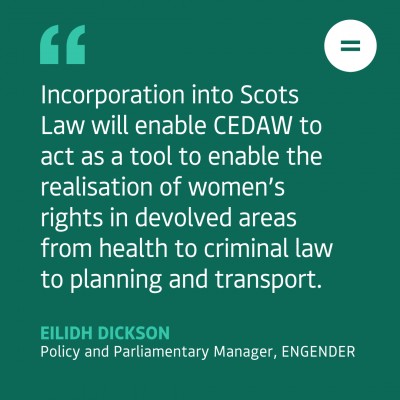 Following years of work by the Taskforce on Human Rights and the Advisory Group on Human Rights, the Scottish Government accepted the recommendation that such a Bill should incorporate a range of international human rights treaties, including the United Nations Convention on the Elimination of All Forms of Discrimination Against Women (CEDAW). Most parties shared this commitment at the election and work on the bill is imminent.

Engender has long called for incorporation of CEDAW into Scots Law (read our report here) and we're excited to get to work on the bill process because of the opportunities we see for progressing substantive equality between women and men in Scotland. In this blog, we set out further what incorporation is and could mean for women in Scotland.

What does incorporating CEDAW mean?

CEDAW – the UN ‘women’s bill of rights’ – spells out in detail women’s human right to equality and non-discrimination. The treaty contains 30 articles, which include minimum standards for women’s rights in work, politics, marriage, education, the economy, and other areas. Equality in CEDAW is based on the principle of 'substantive equality' between men and women, i.e. looking at the condition of women’s lives as a measure of whether equality has been achieved, over formal or legal statements of equality.

Incorporation of international human rights refers to the process of translating international standards into domestic law. There are multiple models by which this can be achieved. The most comprehensive version would mean taking the wording of CEDAW and the other treaties and replicating it in a Scottish Act of Parliament, where it then can be applied by Scottish courts.

Incorporation itself doesn’t change the human rights that we have. The UK as a whole is already signed up to these treaties. In doing so, it has pledged to give effect to the rights the treaties protect. However, they are only accountable for doing so at the international level. The Scottish Government is not able to ratify treaties directly, and the ‘state party’ to CEDAW is the UK — however, the Scotland Act places a responsibility on the Scottish Government and Scottish Parliament to fulfil all of the UK’s international obligations.

States hold one another accountable in different ways: diplomatically (normally bilaterally), or multilaterally, usually through international institutions like the UN or EU. When it comes to CEDAW, the UN’s Committee on the Elimination of Discrimination Against Women monitors state compliance with the Convention. It does so primarily through a panel of appointed legal experts in women’s rights who assess individual states in a reporting cycle. NGOs such as Engender submit reports to shadow the state’s own description of how it is realising women’s rights. We’ve described this process here. There are a couple of other ways that the CEDAW Committee can explore accountability, including individual complaints, although this is rarely used and the decision is not binding, and the inquiry process, which is where the Committee investigates a state on the basis of reports of grave and systematic violations of rights, which it did in relation to Northern Ireland’s abortion laws in 2018.

How does incorporation achieve accountability?

We know that there is a huge difference between a state promising to give effect to human rights and being able to demonstrate how they are implementing and being held accountable for those rights. One aspect of accountability achieved by the incorporation process must mean that any woman can walk into court and ask a sheriff or judge to recognize that her rights have been breached. We therefore also need that court to have access to the international interpretation of the rights so that Scotland keeps pace and embeds materials such as General Recommendations or Decisions that flesh out the text of the rights.

Without effective implementation, incorporation risks being of narrow benefit, restating the rights of women without steps to guard them, realise them and ensure we can access them when we cannot go to court. Waiting for breaches to occur is insufficient even when we need the ability to challenge them, and we know that courts and tribunals remain littered with access to justice issues for women. Embedding women’s rights in legislative and policy processes such as the public sector equality duty will be key to advancing equality and women’s rights and to preventing violations from occurring in the first place.

The UK Government has to date expressed no interest in incorporation. As a result, even the most maximalist approach will only apply to devolved areas such as health and education and will be of limited value in, for example, challenging UK decisions on pensions or immigration rules that lead to starkly unequal outcomes for women and men.

However, incorporation into Scots Law will enable CEDAW to act as a tool to enable the realisation of women’s rights in devolved areas from health to criminal law to planning and transport. Additionally, incorporation into a new Scottish human rights framework will mean that CEDAW sits alongside other treaty rights including the International Covenant on Economic, Social and Cultural Rights (ICESCR), the Convention on the Elimination of All Forms of Racial Discrimination (CERD), and the Convention on the Rights of Persons with Disabilities (CRPD) in a single bill. This will make the indivisibility and mutual reinforcement of these rights clearer and easier and is one of the reasons why we pushed hard to avoid a piecemeal process that would relegate some treaties to a later date.

You can find out more about the HRCS Incorporation Fortnight online here, and see more of Engender's work around CEDAW on our website here.