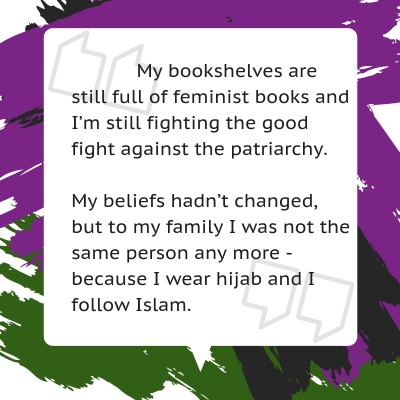 Rose Richmond is a 21 year old graduate from Stirling University. She blogs here about finding her faith, the misconceptions facing Muslim women.

I’ve never been too fond of labels, except for one. When I was 16 my head teacher described me as “fiercely intelligent” and to this day I carry that description as though it were a sword. I walk in this world using my intelligence as my defence; always ready to argue and debate and prove my strength. I studied Criminology and Sociology at University and I spent those four years mostly arguing, and studying so I had the knowledge to back up what I said. I wrote my dissertation on prostitution and feminism and I was used to my views being heard. That was me around a year ago: 20 years old, used to being heard and valued and fairly certain of what the world was about.

And then, as any good author would tell you, an essential plot twist came. I met someone. He was smart and kind and funny. He was also Muslim. In my arrogance I thought I knew everything and naturally I wanted to debate Islam and change my friends mind about it. Looking back I can admit I approached it very combatively; I sought knowledge so I could arm myself and convince my friend of all the wrongs of his faith. So I began to read. I read the Qu'ran and academic texts, I read online information and thought about it a lot.

You’ve probably guessed where this is going…like the numbers of people in the USA who picked up a Qu'ran after 9/11 looking for hatred, they and I found a faith of love and peace.

I grew up in a small close-knit family with a single mum and two sisters and while I love them dearly, their reaction to my decision shook me deeply. I have been told I am no longer the intelligent daughter/sister they once knew, that I have been brainwashed by a religion that hates women and I can no longer truly call myself a feminist and wear a headscarf. I wear my hijab because it empowers me. It is a daily reminder of my faith. My hijab reminds me to not to judge but forgive. Modesty is taught in Islam - to both men and women - in both physical appearance and mental. I cover my hair and dress modestly because I wish to present myself to the world and not to be judged on beauty.

One of the worst parts for me was the accusation that I wasn’t a feminist anymore, the implication (and outright exclamation) that I wanted to be a second-class citizen. That hurt my pride. After all, I still have my fancy 2:1 degree in criminology/sociology, including a dissertation on feminism, my bookshelves are still full of feminist books and I’m still fighting the good fight against the patriarchy. My beliefs hadn’t changed, but to my family I was not the same person any more - because I wear hijab and I follow Islam. They found the perceived dichotomy of feminist and Muslim too much to comprehend. They believed in the stereotypical labels of Muslim women; oppressed, weak, timid, second-class and brainwashed. By simply finding my faith, I had inherited labels that were pushed upon me.

Moreover, they were incredibly wrong and served to create and reinforce a negative and cruel image. To those that still have these images in their mind concerning Islam and particularly Muslim women, I ask them to read and learn. Simply read a Qu'ran. Speak to actual Muslim women and you will see the irony of those labels.

Islam teaches equality. It teaches respect and peace and values education. In some ways I don’t label myself a feminist as much now because those beliefs are part of Islam. I am not a feminist, just a Muslim who reads the Qu'ran and believes in the equality it teaches. If I have to prove to my family and parts of the Western world that their Islamaphobic and media-based stereotype of Muslim women are false then I say watch me. Let them see me succeed and grow and be sure of my faith and my worth as a person in society. I will continue to fight against the patriarchy, within the Muslim community and within my country.

It is so important to separate religion and culture here because it is cultural and misguided patriarchal beliefs that I fight against, not Islam. There are parts of the Muslim community that support male only mosques and who seem to value male prayer over female. The ladies section of many mosques is dark and small, in stark contrast to the large quiet prayer halls that the men use. My faith does not blind me to the problems within the Muslim community but it does inspire to fight for what is right and true.

As I said before, I don’t like labels very much. But if you desperately need to label me - a white, Scottish, convert, Muslim, hijab wearing woman - as anything? Fiercely intelligent just about covers all of that and will save you some time.