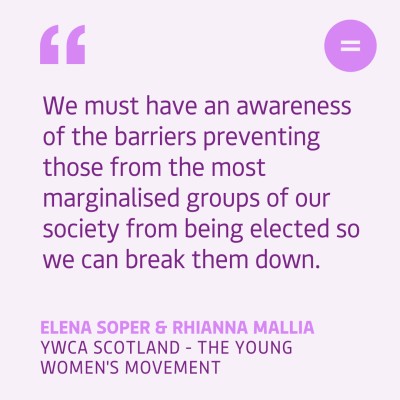 Between now and the local elections on May 5th, we will be publishing a series of blogs from members of the Equal Representation Coalition. They’ll be taking a look at the state of equality in our politics at the moment, discussing their work in tackling barriers to participation, and will be exploring the crucial role that accurate data plays in achieving equal representation in our councils and parliaments and why we need more of it.

Here, Elena Soper, National Programmes Manager, and Rhianna Mallia, Research and Impact Manager for YWCA Scotland - The Young Women's Movement, explore the importance of ensuring our elected representatives are truly reflective of Scottish society, and their work to empower young women to make their voices heard.

YWCA Scotland is a national women’s rights organisation and part of the biggest worldwide movement of young women leading change. We work with self-identifying girls and women experiencing multiple disadvantages, but our work is not designed for crisis intervention. Our focus is on personal growth and development of life skills that build self-efficacy and tackle the root causes of underrepresentation of women in leadership. We are deeply passionate about bringing women’s voices and perspectives into the forefront, and we do this through all of our programmes, our campaigns and our research.

There is not much evidence that gender-sensitive data is gathered and published in Scotland, or used to inform decision making, policy, or to create programmes and projects that respond to the needs of women (Engender 2020. ‘Sex/gender: Gathering and using data to advance women’s equality and rights in Scotland’). We want to work to change that at YWCA Scotland, ensuring women's voices are included, amplified, listened to, and that change happens as a result.

We want young women to influence change. We do annual research, the Status of Young Women in Scotland, into an issue that affects young women and then use the evidence generated to influence decision makers and create programmes to address the gaps in support highlighted. Our approach to designing programmes and research projects depends on the participation of the groups that we are working with; strategic planning is guided by our Advisory Panel, made up of a diverse group of young women under the age of 30. Our research projects have been co-designed with young women; they gain skills and experience in designing and carrying out research, and offer essential contributions to the design of our research.

Our Young Women Lead programme which has been running since 2017 supports young women and non-binary people to become politically empowered and engaged. Originally run as a partnership with the Scottish Parliament, 3 cohorts came together to produce research and recommendations to Government on big issues such as sexual harassment in school and the transition from education to employment for ethnic minority young women. Now evolved to work within local communities, we have groups in Dundee, East Renfrewshire and Renfrewshire who are tackling issues from community perspectives.

This programme is designed to empower young people to become influencers and citizen advocates in their own community and act as role models to others. Graduates from previous programmes have been supported to take up leadership positions in the third and public sector, become community councillors and we are very excited to have one graduate standing for election in Glasgow in the upcoming Council elections.

It is so important that our elected representatives are truly reflective of Scottish society. Young women in Scotland need visible role models who look like them, have the same values as them, and come from the same background as them.

Our Status of Young Women in Scotland research in 2018 found that 64% of survey participants did not feel their voices and views are sufficiently represented in Scotland’s politics and policies and that 75% of participants who stated they considered themselves to be “politically engaged” would not run for public office.

There is a clear desire from young women to be involved in politics and activism, yet standing in an election is something that is rarely considered. The reasons given for this included fear about the current toxic political climate, worries about online abuse and structural issues within our political institutions making them not accommodating for women.

We are becoming increasingly aware of the gaps in representation in our councils and our Parliament, and we need to understand the root causes behind this to tackle it. That’s why it is crucial to gather gender disaggregated data on those who are standing for office.

We must have an awareness of the barriers preventing those from the most marginalised groups of our society from being elected so we can break them down.

It is an undisputable fact that changes in legislation and policy, product development and urban planning, often do not consider the specific needs and experiences of women. This is because of a lack of data but also because decision makers and leaders have not considered the inclusion of these experiences to be important.

We’re working to challenge that perspective, to provide gender disaggregated data to address this data gap, and to encourage young women to make their voices heard.

If you’d like to get involved with any of our programmes, please visit www.ywcascotland.org. We’re currently recruiting for Young Women Lead in Fife and we’ll be coming to the Highlands and Aberdeen next!