GUEST POST: Women’s Representation in the Scottish Local Council Elections 2022: What We Know So Far 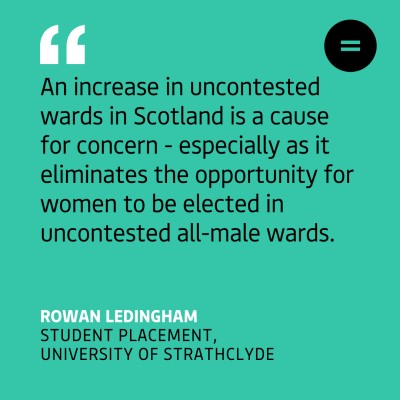 In this post, Rowan analyses women's representation in the upcoming local council elections, and explores issues around uncontested wards, re-standing rates, and press coverage of the elections.

With the local council elections just around the corner, it is a good time to reflect on what we know so far before people across Scotland head to the polls. As part of my ongoing research and placement with Engender I have analysed a number of areas related to the upcoming elections including candidate selections, re-standing rates among incumbent councillors, and press coverage. This blog will address each of these areas in turn.

Despite some positive strides, a number of local councils still disappoint with a low proportion of female councillor candidates. In Comhairle nan Eilean Siar – currently Scotland’s only all-male council – only 8 women are standing for election. They are competing against 42 male candidates for a total of 29 seats. Considering the work by Elect Her aimed at encouraging more women to stand in this local authority, this is a poor outcome. Other councils with a similarly poor representation of female candidates include:

This makes it unlikely – but not impossible – that we will see a significant increase in women’s overall representation in Scottish local government. Similar figures have been released in other areas of the UK, with women representing a third of local election candidates in both England and Wales. Such glacial progress regarding women’s participation in local politics is clearly not unique to Scotland.

Re-standing rates are slightly higher among male councillors relative to their female counterparts (68% versus 66%). While this may appear positive for female representation in local councils, the fact that councils in Scotland are predominantly male, older, white and middle class, presents obvious problems related to high rates of incumbency. A high incumbency rate can act as a barrier to diversity to the extent that it prevents the election of new councillors.

In 7 local authorities, over half of female councillors are standing down. Councils with the lowest rates of women standing for re-election are Moray (33%) and Stirling (29%).

There is also a record number of uncontested wards in the 2022 Scottish Local Council Elections. In an uncontested ward, not enough candidates have been nominated so an election cannot take place. Due to a shortage of candidates in 8 wards in the Western Isles, Shetland Isles, Highlands, Moray and Inverclyde, all of those who stood will automatically be elected.

According to Ballot Box Scotland, this is the highest number of uncontested elections since the switch from First Past the Post to Single Transferrable Vote (STV) in 2007. Uncontested elections are a clear threat to representative democracy as councillors are elected without receiving a single vote from constituents. This system failure is a prominent ill at the heart of local government in England, where uncontested seats have been a feature of local elections for decades. The STV voting system is considered to be a solution to this problem, so an increase in uncontested wards in Scotland is a cause for concern - especially as it eliminates the opportunity for women to be elected in uncontested all-male wards.

It is promising to see that much of the press coverage around the election thus far has focused on a lack of representation and diversity in Scotland’s local councils. The minimal increase in the percentage of women standing for election and limitations of voluntary mechanisms to increase women’s representation have been noted in the press, as well as several articles that have allowed female councillors from Glasgow City Council to discuss their experiences and reasons for not standing for re-election. The difficulties in attracting women to stand for council in the first place has also been an emerging theme. Finally, we hope that the evident push to encourage candidates to complete the Scottish Government diversity survey will provide a more accurate insight than previous years into the makeup of both those standing for election and those who are ultimately successful.

The key points to be aware of before the elections take place are:

In my final report for Engender, I look forward to providing a more detailed breakdown of the data on councillors re-standing and presenting the findings from interviews with female local councillors on their reasons for standing down from the role.

[1] This is unverified data based on information about candidates attained through online research, highlighting the need for comprehensive equalities monitoring of candidates and robust data provision by local authorities, political parties and government.