Today we're publishing the first in a series of blogs from two student placements Engender is hosting from the University of Strathclyde Applied Gender Studies and Research Methods course. These blogs explore women's representation and decision-making around women's equality in local authorities across Scotland. You can see other blogs in the series here.

Katie Young graduated from the University of Glasgow with a degree in English Literature in Summer 2020, and is now studying a Master’s degree in Applied Gender Studies and Research Methods at the University of Strathclyde. She is passionate about women’s fiction and empowering girls and young women to fight for gender equality in Scotland through volunteering with Girlguiding, and tweets under @katieeey. 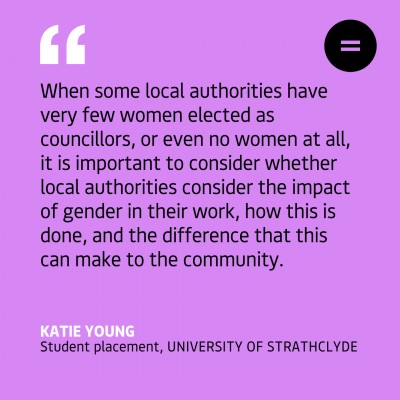 Building on Engender’s most recent Sex and Power report, which found that women made up only 23% of local councillors despite accounting for 52% of Scotland’s population, my project focuses on the work of local authorities, how we can best achieve gender equality, and what might need to change to ensure that we get there. When some local authorities have very few women elected as councillors, or even no women at all, it is important to consider whether local authorities consider the impact of gender in their work, how this is done, and the difference that this can make to the community.

In undertaking this project, I chose to focus in two neighbouring local authorities, West Dunbartonshire and Argyll and Bute, due to their difference in size and population spread. As one of the smallest local authorities in Scotland, West Dunbartonshire covers Clydebank and Dumbarton, and its council is lead by a coalition of SNP and Independent councillors. Both council leaders are men and there is at least one woman holding a seat on all but one of the individual wards, with women making up six of the twenty two positions, which is 27% of elected councillors overall. The SNP has the most women of all parties represented on the council, with four of its six members. This is followed by Scottish Labour, where there is one woman and seven men represented on the council, and the Scottish Conservative and Unionist party, the only party to have a balanced representation, which has one man and one woman holding elected roles. The other groups represented on the council, the West Dunbartonshire Community Party and Independent officials, are both only represented by men.

Argyll and Bute is the second-largest local authority in Scotland by geographical area, and covers areas in mainland Scotland and some islands including Bute, the Isle of Mull and Iona, and Islay. The council is lead by a coalition of Independent, Liberal Democrat, and Scottish Conservative and Unionist party councillors, and like West Dunbartonshire, both council leaders are men. Women hold ten of the thirty six elected positions on the council, 29% overall, and three of the eleven individual wards do not have any women elected. Similarly, the SNP have the most women represented on the council, with four women holding their eleven elected seats, followed by the Scottish Conservative and Unionist party, which has two women and seven men on the council, and the Liberal Democrats, with one woman and four men having been elected. Women account for three of the eight Independent councillors and the Independence for Scotland party only have one man represented on the council.

Both councils are slightly above the average in the Sex and Power research, although have some way to go in ensuring gender equality. Here, women still holding comparatively fewer seats on the council than men, and only the Scottish Conservative and Unionist party in West Dunbartonshire having equal representation in their elected representatives.

More broadly, I’m interested in researching the way that both councils carry out Equality Impact Assessments, which considers the impacts that decisions may have on the lives of women and people with other protected characteristics. This supports the Inter-Parliamentary Union’s toolkit for creating a ‘gender sensitive parliament’, which is one that creates a that responds to the needs of men and women equally in its structures both internally and externally as well as in its work on a day to day basis, as it works on embedding and mainstreaming gender equality throughout its work. Both West Dunbartonshire and Argyll and Bute publish some information on how this relates to specific policies and areas of the council’s work, but this is not consistent. I’m interested in exploring the common areas that both local authorities identify, and where differences may exist. For example, this may be that one local authority publishes its guidance for carrying out these assessments, but one does not. By including women at all stages of the decision making process and considering the impact that these decisions may have, we are one step closer to ensuring gender equality in the future.