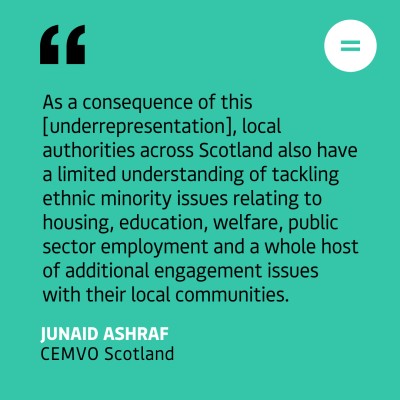 Between now and the local elections on May 5th, we will be publishing a series of blogs from the Equal Representation Coalition. They’ll be taking a look at the state of equality in our politics at the moment, discussing their work in tackle barriers to participation, and will be exploring the crucial role that accurate data plays in achieving equal representation in our councils and parliaments and why we need more of it.

Here, Junaid Ashraf, Community Engagement Officer at CEMVO Scotland takes a look at some of the barriers faced by ethnic minority people entering politics, how these contribute to persistent underrepresentation in our councils and parliaments, and why it’s high time for change.

In the year 2022, CEMVO Scotland believes that society has accepted the argument that a democracy which is representative of the nation we live in is a good thing. We no longer subscribe to the idea that politics should be a career for the elite and those with aspirations to rub shoulders with the rich white men traditionally found in those circles.

We understand now that creating a diverse representative body can have a net positive impact on our lives as we seek to ensure that all experiences of Scotland are represented where the levers of power lie. Unfortunately, while we as a society might understand this, achieving it in reality is a much more difficult task, requiring decisive action from those already in power - including from councils, parliament and political parties.

We know that there are many structural and cultural barriers which ethnic minority people face at all levels of political involvement, from the point of joining parties to gaining nominations, to becoming a candidate and even once successfully elected as a councillor, MSP or MP. The fact is that minority ethnic people entering politics are contending with long history of exclusion from public life. The default idea in our society of politicians as white, wealthy, older men is deep rooted and remains a barrier for those who do not fit this outdated image. This can play out in the minds of the electorate when they go to the polls, and also has shaped the way that our political institutions are set up and operate. This means that our institutions are often rigid and hostile to new perspectives, and to the change that they have the potential to bring about. We also recognise that abuse (online and offline) is a major deterrent to people who might seek public office, and we know that those from ethnic minority communities in political spaces are at an increased risk of receiving this. These are some of the factors that result in the extreme underrepresentation that we see.

These statistics have far more negative reaching impacts than simply the outlook of our local authority chambers. As a consequence of this, local authorities across Scotland also have a limited understanding of tackling ethnic minority issues relating to housing, education, welfare, public sector employment and a whole host of additional engagement issues with their local communities. For example, as there is a lack of diversity within the council chamber, minority ethnic led community groups feel disenfranchised to engage with their local representatives. This silences their voice locally and impacts their ability to apply for crucial local funding as they are unaware of applications, or the local authority does not value their work even if an application is made due to a lack of sustained interaction.

On May 5th 2022, the chance to diversify our local chambers of representation will present itself again. But quite often, the electorate is not met with the ability to elect politicians who will be able to authentically represent their experience as a person. It seems like the council elections will repeat this pattern and we will have missed another opportunity to increase diverse representation. This year many wards across Scotland will again not have the chance to vote for an ethnic minority candidate on their ballot.

CEMVO Scotland is proud to play a part in the Equal Representation Coalition, and supports the call to encourage political parties to publish diversity data on their candidates and successfully elected councillors. It is only through having a clear picture of the political landscape can we then work as third sector organisations, government and political parties to ensure that we progress the healthiness of our democracy to be inclusive for all for years to come.

To learn more about CEMVO and the work they do supporting the ethnic minority voluntary sector and its communities in Scotland, check out their website here.