During this 16 Days of Activism On Violence Against Women - and with high profile #metoo stories appearing in the courts and the media - we continue to hear stories of harassment and abuse of women and girls. This guest post, from an author who wishes to remain anonymous, explores the issues of power, privilege, and 'wandering hand trouble'. 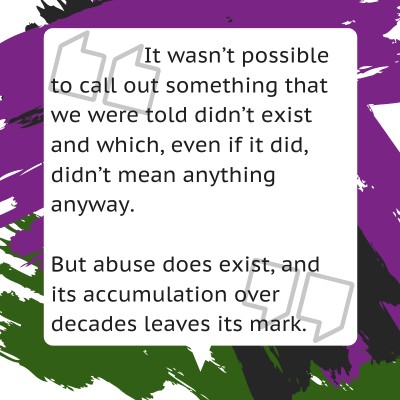 Back when I was a young woman, when it was described as ‘wandering hand trouble’ (WHT) for short, we were taught that sexual assault and harassment were just what happened.

It would happen more if you were to pluck your eyebrows, wear a choker, or hoik your skirt up above your knees. If you wore American Tan 60 denier tights, you was ‘asking for it’. We didn’t really know what we were supposed to be asking for, especially when we wore knee-length cotton socks on top of the tights.

It was just another of the great mysteries when my mother would say, ‘don’t let your father see you wearing that,’ and which made me feel funny inside because I didn’t know why not.

Of course, being on the receiving end of the abuse that ‘just happened’, made us feel deeply uncomfortable, but - because it happened to all of us all the time - it was not even mentioned.

So I didn’t really know what to do about:

It wasn’t possible to call out something that we were told didn’t exist and which, even if it did, didn’t mean anything anyway. But abuse does exist, and its accumulation over decades leaves its mark.

We found that out by talking about our experiences and how we felt, amongst ourselves. Some of us found our way into the emerging Women’s Aid and Rape Crisis movements, and turned our personal experiences into political action. Others found a way into the establishment through criminal justice, politics and academia. And over the past 40 years or so, we can see that it’s made some difference. But that there’s still a heck of a long way to go.

Thank goodness there’s been some way to report the princes, politicians and other ‘pillars’ of privilege. Those in power make the rules about how things should be. But it doesn’t have to be like they tell it. Maybe, that power is a little bit more dilute than it used to be. And maybe the wandering hands are losing their grip.