GUEST POST: Who says what? A breakdown of gender bias in news topics and reporting 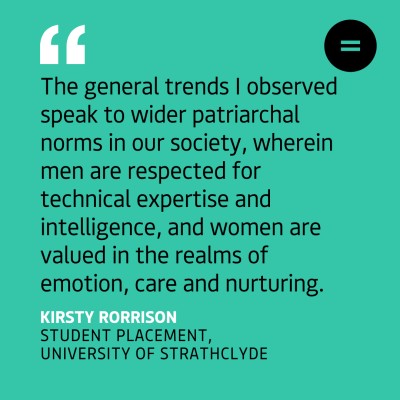 In the second of three posts, Kirsty Rorrison continues research into gender bias in political news reporting during the COVID-19 pandemic. Here, she looks specifically at the breakdown of bias in topics and authors, as well as whose voices are missing in the reporting of the pandemic. You can read Kirsty's first post here.

As my placement with Engender is nearing its end, I have finally completed my research on gender, COVID-19 and media. In this blog post, I’m going to discuss what I found out in my investigation and why it was crucial that I delved a bit deeper into this topic. As I mentioned in my previous post, my main area of interest in this research has always been the ways in which women in politics are represented. However, I also wanted to look at how other women, and more broadly gender, appeared in news coverage of coronavirus. For this research, I ended up coding 108 news stories. I took note of the topic, the gender of the journalist, and the identity markers of every person mentioned in each article. I wanted to see where gender appeared in news coverage, whether this related to the kinds of topics being discussed, the journalists who wrote about them or the people mentioned in articles. In this blog post, I will outline what my analysis revealed about journalists and news topics - in other words, who is writing, and what are they writing about? 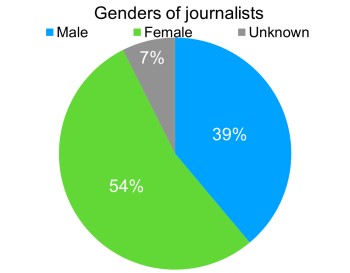 I was surprised to find a fairly even split between male and female journalists in my sample [Figure 1]; in fact, women were actually writing about COVID-19 more than men. At first glance, I thought this might suggest that journalism has become more equal in terms of gender. However, upon closer inspection, I realised that things weren’t as progressive as they seemed. While men and women were both reporting on the COVID-19 pandemic, the topics assigned to journalists varied significantly with gender. I found that women were far more likely to cover stories on public health and the NHS than their male counterparts, whereas reporting of politics and economics was often carried out by men. This is consistent with previous work on women in journalism - ‘hard’ news stories relating to industry and politics tend to be given to men, while women are relegated to covering so-called ‘softer’ topics like health, social care and education. This is not true in every case, and I did record instances of women writing about politics and business. However, the general trends I observed speak to wider patriarchal norms in our society, wherein men are respected for technical expertise and intelligence, and women are valued in the realms of emotion, care and nurturing. A breakdown of the article topic by gender of the journalist is shown below [Figure 2]. 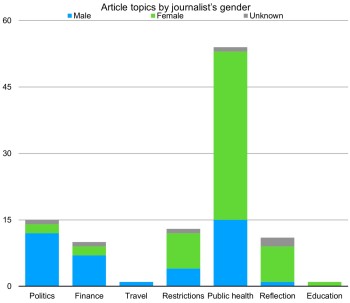 I’d spent quite a while exploring what journalists had been reporting on when I suddenly thought to myself, “what about the topics which aren’t being written about?”. I’d combed through 121 news stories over a seven day period, but I hadn’t encountered anything about domestic violence or caring responsibilities. While these topics hadn’t come up, I’d read multiple articles about planning holidays around travel restrictions. It’s a well-known fact that domestic violence, for instance, has become a dire issue during the UK’s lockdowns. This fact was not reflected in news coverage. The pandemic has been a horrific time for the disabled community, yet once again these struggles were not evident in Scottish newspapers (save for a couple of references to “vulnerable” Scots). Women have grappled with hugely increased caring responsibilities, and people of colour have faced a much higher risk of death from COVID-19 than those who are white. Yet again, these issues did not come up even once in seven days of news coverage from Scotland’s four daily newspapers. It has already been established that reporting on the pandemic prioritised the needs of the privileged, but my findings illustrate just how little care and attention is given to those who are not white, wealthy, able-bodied and male.

When I brought this up in a meeting with my supervisors from Engender, Miranda Barty-Taylor reminded me that news coverage is dictated by money - things are only written about if they’ll sell newspapers. In other words, if certain topics aren’t appearing in the news, it’s likely because papers do not think that readers want to see them written about. It’s interesting that news agencies assume people will respond more to stories about airports, hay fever and football than to coverage of the experiences of women, disabled people and ethnic minorities. The consequences of the pandemic that are unique to marginalised people have effectively been obscured from mainstream narratives around COVID-19.

Exploring what is being written about and who is doing said writing has been illuminating. While I didn’t uncover anything that hasn’t already been said by those researching gender and media, it was astonishing to see just how much the patriarchy and stereotypical gender roles inform what news is being reported on and by whom. In a society where women are still not seen as equally intelligent and capable, it makes sense that female journalists tend to be assigned articles about public health and education, whereas men are given stereotypically ‘harder’ stories to cover. This is not to say that reporting on health and education is in any way easier or less valuable, but rather that such topics are traditionally associated with women (just as economics and politics are associated with men) and are thus less societally valorised. Furthermore, when white, middle-class, able-bodied male experiences are seen as the norm, those who do not fit into this category are excluded from popular discourses.

In my next and final blog post, I will delve into how the patriarchy and all of its effects complicate the ways in which female politicians are represented in news coverage. For now, I hope that I have effectively set the scene in which women in politics are discussed in the news.