GUEST POST: When childcare isn’t affordable, we all pay for it 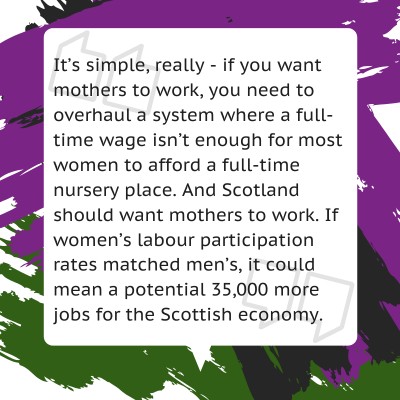 Katie Dickerson is a New Yorker raising two strong little girls in Glasgow. She is passionate about advocating for the rights of working mothers. You can follow her on Twitter @Katie_Popple for jokes about parenting small children and rants about gender equality.

Here she blogs for Engender about why childcare costs are still a major barrier to women's equality.

I’ll admit it - when I decided to have a second child, I didn’t crunch the numbers first.

I thought about how nice it would be for my older daughter to have a sibling, and how complete my family would feel once there were four of us in it. I was so wrapped up in the warm fuzziness of it all that I didn’t consider how expensive this new kid would be.

My oldest had been attending nursery four days a week, so I was used to eye-wateringly high childcare bills. But it was only when I calculated the childcare costs for two children under five that it really hit me - nursery fees could financially ruin my family.

Let’s talk numbers, shall we? Because when it comes to childcare, it’s all about the numbers:

It’s great that the Scottish Government is increasing the number of funded childcare hours for preschoolers, but here’s the problem: by then, it’s far too late for many women. They had to give up their careers after their babies were born, when they discovered that high childcare costs meant it wasn’t financially worthwhile for them to return to work. After three years out of the workforce, they may struggle to get another job at the same level that they were at when they left. They will have missed out on promotion and training opportunities. Employers treat them with caution, thanks to the baby-sized gap in their CV.

For many women who take a career break after having children, their salaries never recover. A recent survey showed that nearly 60% of British women don’t return to their previous career after having kids. The top reason cited? Childcare was too expensive. The average British mother who will leave her career for a more flexible job - one that fits around her childcare responsibilities - will take a pay cut of £11,000 a year.

Some women - like me - get lucky. We get paid more than childcare costs us, but just barely. We basically pay for the privilege of working. Next year I’ll be chucking over a grand at my local nursery each month for the joy of sitting in an office chair eight hours a day.

You might be wondering where fathers fit into all of this. While fathers are clearly impacted by childcare costs too, it’s almost always the mother who gives up work or reduces her working hours after having a baby. 17% of women leave employment completely in the five years after childbirth, but only 4% of men do.

Cultural expectations play a big role here - only 7% of respondents to the British Social Attitudes survey felt mothers of under-fives should have full-time jobs, showing that the idea that a mother’s place is in the home is still very much a thing. Shared Parental Leave was supposed to change all that, but with take-up as low as 1%, mums are still doing the majority of the childcare. Fathers feel like they can’t afford to take Shared Parental Pay at £145 per week, and they worry that their employer will doubt their commitment to their job if they take time off for their children.

They’re right to worry - after all, look what happens to mothers.

If only Scotland could be a little more like Scandinavia. In Scandinavian countries, access to affordable childcare is a given, with the government placing limits on the maximum fees that parents have to pay. Swedish parents pay on average just 11% of the cost of a childcare place, and government picks up the rest of the bill. Denmark has a similar system, and the two countries have the highest rates of maternal employment in the world.

It’s simple, really - if you want mothers to work, you need to overhaul a system where a full-time wage isn’t enough for most women to afford a full-time nursery place. And Scotland should want mothers to work. If women’s labour participation rates matched men’s, it could mean a potential 35,000 more jobs for the Scottish economy. It could also boost the economy by as much as 5% GDP, or £7.6 billion GVA.

Invest in mothers, Scotland. We’re worth it.