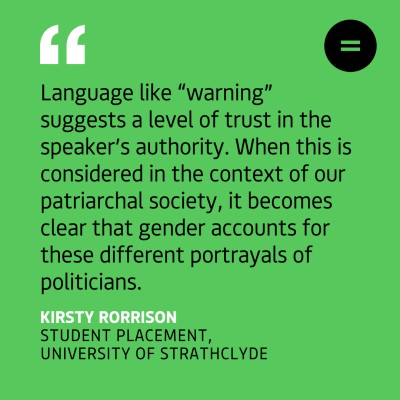 Kirsty Rorrison's final post continues research into gender bias in political news reporting during the COVID-19 pandemic. Here, she discusses how male and female politicians are quoted and referenced in the media, and how this language plays into wider patriarchal society. You can read Kirsty's first post here and the second post here.

For my third and final blog post, I want to discuss what my research found about female politicians and their news coverage relating to the pandemic. In my last post, I discussed my findings on journalism and COVID-19 in a more general sense; I showed that the topics reported on and who was writing about them seemed heavily linked with patriarchal gender norms. Now, I want to consider what I learned about women in politics based on their representations in news coverage of the pandemic.

Firstly, I found that male politicians received more mentions than women, and the same men were referenced multiple times. Women received fewer mentions overall and were less likely to be mentioned repeatedly. While I was conducting my research, I realised that it wasn’t sufficient only to employ a quantitative analysis of politicians mentioned according to gender, race, and so on; while this data was certainly helpful, it failed to capture the subtleties and nuance I noticed in the news coverage I was analysing. On the advice of my supervisors, I began to think about the ways in which politicians were being represented when they did appear in the news. Were they quoted directly, indirectly, or not at all? What terminology was used to describe them and their ideas? Just because a politician was mentioned does not mean that they have been mentioned the same way as others.

After consulting Carmen Coulthard’s work on direct and indirect quotations, I realised that men tended to be directly quoted - often extensively. On the other hand, women were directly quoted much less and tended to have their thoughts summarised and shortened by the journalist. For example, I only recorded two instances of First Minister Nicola Sturgeon being directly quoted, while male politicians were consistently given direct quotations. Coulthard argues that we can understand this trend through feminist theory - men’s voices are prioritised, and their opinions are granted respect and trust, and as such, they do not have their ideas rephrased or condensed. On the other hand, women rarely get to express their opinions directly and fully since their authority is not often accepted, and subconsciously it is believed that their ideas can be adequately communicated by others. 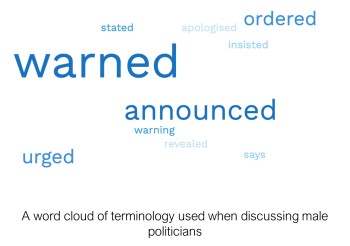 In terms of the words used when politicians were mentioned, I found that women were described via less definite terminology than men in politics. For instance, most of the time, men were “saying,” “asserting,” “warning,” and so on. Women, on the other hand, often “claimed,” “suggested,” or “argued.” When I first identified this difference, I didn’t think it was particularly noteworthy. However, as I furthered my reading list, I began to understand the nuances present in this difference. When women are described this way, they are subtly undermined and questioned; a term like “claim” does not indicate certainty but rather a degree of scepticism about what is being said. 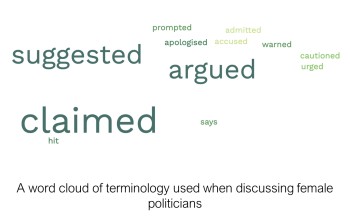 On the other hand, language like “warning” suggests a level of trust in the speaker’s authority. When this is considered in the context of our patriarchal society, it becomes clear that gender accounts for these different portrayals of politicians. Women are described using more uncertain language because they are viewed as less competent and less authoritative as a result of their gender; the fact that I recorded these instances multiple times shows that it was a definite pattern rather than an isolated incident. Inversely, men are granted trust and authority to know because they are men - by virtue of their gender and its position within the patriarchy, they are seen to be knowledgeable in whatever they discuss.

With this blog post, I conclude my placement with Engender. It has been a privilege to work with each of my talented and knowledgeable supervisors, and I’ve gained so much from this experience. My research has shown that Scottish news coverage of the coronavirus pandemic is clearly gendered - this relates to what is written about, who is writing about it, and who is mentioned in news stories. In terms of politicians, I have found that men are mentioned more overall and that people of colour in politics are notably underrepresented. I have also seen that the ways in which male and female politicians appear in news coverage are different; while men tend to be directly quoted, women are often indirectly quoted. There were also differences in the language used when men and women in politics were mentioned; while men “warned,” “stated,” or “said” things, women “claimed” and “suggested.”

Overall, gender plays an undeniable part in the ways female politicians are represented (or not represented) in Scottish news coverage of the pandemic, but in order to understand the extent of this difference, I needed to delve deeper than a simple quantitative analysis of appearances. Further work must be done to explore these findings further, and in the future, an intersectional analysis should be employed to account for factors like race and sexuality.