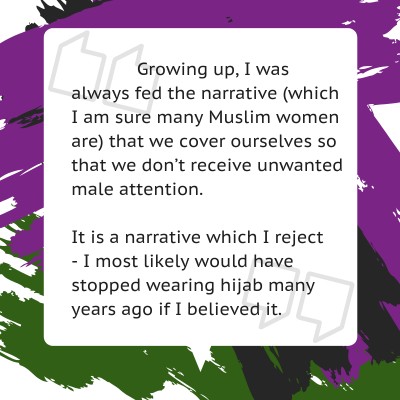 Fai Yousaf regularly blogs over at Life of Fai and here she writes for On the Engender about her views on feminism and the hijab.

By that, they don’t mean the back combed hell that I attempt on occasion nor my oversized pom pom hat – both of which, it can be argued, should be banned. It is the hijab/head scarf which often evokes such strong responses from some of my female counterparts. The word hijab is more widely associated with the head covering Muslim women wear and for the purpose of this article, I’ll translate it as such. However in reality, the word encompasses a way of being, behind which is the principle of modesty and not only applies to females but men too.

As a woman in my mid thirties, I have now been wearing hijab for over twenty years. I cover my hair and for the most part my body except when I’m at home, in front of my immediate family or my female friends. I cover my luscious locks (or is it a pixie cut?) in a style that I’m drawn to on any particular day; be it the more traditional style hijab, a turban style as seen in my picture below, or a woolly hat on a winter’s day.

I am under no illusion that the hijab continues to be forced on women in various parts of the world however the majority of Muslims, like myself, condemn this. Religious practices of any type should stem from one’s own desire to express their spirituality. My own reasons for wearing hijab stem from choice…now. 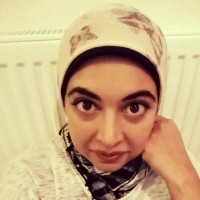 Whilst I was never forced to wear it, I can’t deny that there was an expectation that by the time I hit my teenage years, I would be covering. I come from a practising family; my uncle is the chairman of a well known Mosque in Glasgow, I studied the religion growing up and my mother up until recently sat on the board of a local religious organisation. Growing up, I was always fed the narrative (which I am sure many Muslim women are) that we cover ourselves so that we don’t receive unwanted male attention.

It is a narrative which I reject – I most likely would have stopped wearing hijab many years ago if I believed it. There is no reason explicitly stated in our religious text and I therefore believe the reasons for wearing hijab are open to interpretation, perhaps even subjective. The problem I have with the aforementioned narrative is that it not only gives power of my body over to men but also indicates that men are uncontrolled insatiable beings who require us to cover in order to protect themselves. Neither of which I agree with, of course.

The wearing of hijab, for me, stems from my connection with God; what I believe I have been asked to do as a sign of observance. I am required to cover in the same way I do when I pray, even if no men or women are around me. The hijab for me is indicative of another way in which I attain an element of spirituality. It therefore makes sense then that when my connection with God wavers then so too does this aspect of my spiritual connection.

There have been two occasions in my life when I seriously considered removing my hijab. Once at the age of 23 years old when I decided that I no longer believed in the narrative of ‘covering for men’. In fact, if this was the reason then my hijab at times brought plenty of attention countering the effect it was supposed to have. I spoke to my family about my impending decision; my dad never had a strong opinion on hijab and whilst I could sense my mum’s muted disappointment, I was reminded that the decision was mine to make. However I never got there and instead, encouraged by a friend, I explored further. It became clearer to me that hijab, for me, is another aspect of worship.

My second waning came last year after a series of challenges - the death of a loved one and the diagnosis of a friend’s illness to name but a few. I felt angry and if I wore hijab for God then I no longer wanted to do it. I am still wearing it - not prone to rash decisions; my grief less intense and my anger having simmered.

As of late there is a sense of defiance too, for me, in the wearing of the hijab. I am regarded as somewhat oppressed by elements of society and even branches of feminism for the idea of covering up.

They imply that I am hindering women through the choice I make. However if I choose who views any part of my sexuality then the notion that I am only liberated if I uncover implies my worth or power lies solely in my body – the very idea which feminism rejects.

Perhaps my views are even more progressive than those who claim otherwise.