GUEST POST: Stand with the pro-choice voice across the US

Feminist across the world have continued to watch in horror as reproductive rights are under attack in the USA. In this blog, Jane Carnall, an activist with Abortion Rights Edinburgh sets out why we must act in solidarity with those seeking access to abortion in the states. 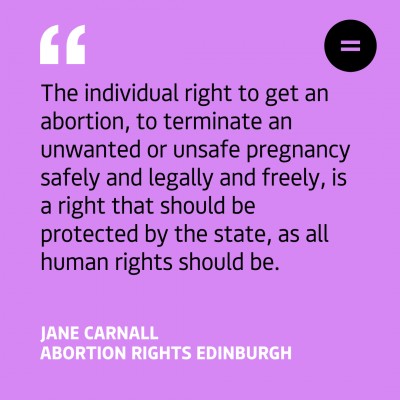 This month, a law passed by the Republican majority governing Texas came into force, and effectively banned all legal abortion in the state of Texas after six weeks gestation - that is, well before most people would even realise they're pregnant.

On 2nd October, Abortion Rights Scotland is taking part in the international day of action against this legislation.

Why is this urgent and important for us to do? In Scotland we have actions of our own - we want to get the Scottish Government to legislate the creation of buffer zones around clinics that perform abortions, to prevent anti-choice protesters harassing patients: we want to ensure everyone who needs an abortion can access one: we want to decriminalise abortion, as essential healthcare and a basic human right should never be a criminal offence.

In the US, since the famous court decision of Roe vs Wade, it has been legal in any state for anyone to get an abortion in the first trimester of gestation without interference from the state: restrictions are permitted in the second trimester and a state is allowed a complete ban but for "life and health of the mother" restrictions only in the third trimester. This court decision was so grounded in past and successive court rulings, in the principle of the American constitution providing a right to privacy between a doctor and her patient, that despite successive right-wing administrations introducing further restrictions, it has been impossible to overturn it completely within the United States.

Any clinic performing abortions after six weeks: any staff employed by that clinic: any doctor or nurse or counsellor advising someone where to go to get an abortion: effectively even a driver who took a pregnant person to a clinic could be sued. An anti-choice group has set up a website to allow whistleblowers to provide information on anyone they think may have had an abortion after six weeks - various apps have been written by campaigners to allow individuals to bury this website in false information. (Apparently the Republican Governor of Texas, Greg Abbott, has been accused of having an abortion after six weeks 77 times by only one individual using one of these apps.)

This counter-actions are both funny and useful, but the threat of a suit for ten thousand dollars to shut down clinics and penalise staff is very real. We have seen how the far right loves to employ this tactic, at home and abroad, with even Scotland seeing increased use of vexatious litigation attacking equality legislation and attempting to restrict the rights of women, trans people, and other minoritised groups.

President Biden has instructed the Department of Justice to sue the State of Texas over this idea of allowing private citizens to assume the rights of the state in determining whether or not a pregnant person in the state of Texas can get an abortion. This countersuit may save the right to abortion in Texas and prevent the greedy eyes of anti-choicers in other states looking on clinics closed down and people struggling to reach other states in time to get an abortion, but the idea will remain, and we must always stand together against it: the individual right to get an abortion, to terminate an unwanted or unsafe pregnancy safely and legally and freely, is a right that should be protected by the state, as all human rights should be, and not abrogated by a private citizen with bigoted ideas about who deserves human rights and who does not."

Abortion Rights Scotland will be gathering on the Meadows on Saturday 2nd October to stand together for a photo-event at 2-2:30pm. We hope you will stand with us. Find out more and join the event on Facebook.