The (much delayed) report from the UK Government’s Commission on Race and Ethnic Disparities (CRED) was released last week, and claimed that many of the racial disparities found in the UK do not have their origins in racism. The report was met with incredulity by people and organisations who witness the myriad ways in which racism and white supremacy still impact on all areas of our politics, economy and society. This guest blog from Dr Shridevi Gopi-Firth explores and rejects the idea presented in the report that because ‘not all’ people are racist, institutional racism cannot exist.

Dr Shridevi Gopi-Firth is a Speciality Doctor in Eating Disorders for NHS Scotland, a ChoosePsychiatry 2020 representative, and Board Director of @Saheliya. She has been invited as BAME expert and peer reviewer for various guidelines and organisations including the upcoming Scottish IGN guidelines for Eating Disorders. Follow her on Twitter @Tychitha. 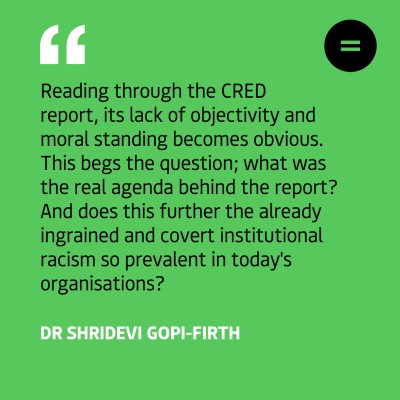 Nearly every healing or therapy starts with acknowledging your illness. Why is it that we as a society are unable to stand up and say ‘yes, the illness of racism exists’? Why does the Government need to come up with whitewashed reports like the CRED in this day and age to convince the public that racism is a thing of the past? It feels like an insult to our collective intelligence, while we BAME people continue to face so many instances of different levels of racism in our day to day lives.

Just like the harmful hashtag #NotAllMen attempted to derail important conversations about the safety of women and silence the voices of the very real, very present everyday oppression women are facing, is this report just another repurposed #NotAll denial to maintain status quo and pander to White fragility?

Reading through the CRED report, its lack of objectivity and moral standing becomes obvious. This begs the question; what was the real agenda behind the report? And does this further the already ingrained and covert institutional racism so prevalent in today's organisations?

To paraphrase author Ijeoma Oluo, our unequal society was designed historically to deliberately keep marginalised people in the margins. During colonial rule this was done openly as the White men in power oppressed the 'coloured natives'. Their 'benevolence' was bestowed as employment into lower ranks or accommodation in lower quarters. You could say some 'Whites' even during that time were seen as more progressive and inclusive than others – so this #NotAll framing of racism would have been applicable even then.

Through the centuries and decades policies have evolved and been 'whitewashed' to appear just inclusive enough on the surface to hide this form of racism. A new form of internalised racism evolved over the centuries - perpetuated by generations of BAME people being told they were 'not good enough', and reinforced by structural and institutional racism, not to mention interpersonal racism. A beautiful illustration of this is provided by Camara Phyllis Jones in A Gardener’s Tale, where she uses an allegory of gardening to explain the three levels of institutional, interpersonal, and internalised racism and how these manifest in society.

While thankfully, a lot of us BAME people have noticed fewer acts of overt interpersonal and structural racism as the years have gone by due to certain anti-discrimination laws, the beast of institutional racism has mutated into covert discriminatory practices and standards while interpersonal microaggressions continue to thrive in society and workplaces. The reporting practices and so-called safeguards put in place to prevent these pitfalls do not necessarily work, where there is no actual structural or interpersonal support, and there is pressure to produce proof of microaggressions. In addition, internalised racism passed down from generation to generation makes us question reality and these microaggressions simply reinforce every internalised belief we hold.

The CRED report implies that, although there are still 'snowy white peaks at the very top of private and public sectors', racism is no longer an issue because there are now ethnic minorities in the Cabinet, more BAME students have been accepted into Oxford, etc. This smacks of a #NotAll denial very much similar to the 1800s colonial Britain, transported to the so-called open and inclusive Britain of the 21st century. Should we not be aiming for better?

When we expect better from our nation, it is disheartening and frankly insulting to be told by the likes of the CRED report that BAME communities cry wolf for every disadvantage faced. I'm sure, like me, a lot of BAME people resent this implication. We have worked diligently to uphold our country's economy and in fact endured more indignities in the workplace and society than we have ever demanded special, or even equal, treatment for perceived sufferings “seen through a prism of White discrimination”, as the report puts it.

Being stopped for 'random security checks' despite being the commander of your aircraft while your White co-pilot, crew and White partner are waved through every time is not 'unconscious bias'. Being followed around by security as an Asian woman in a supermarket and told to step aside from the till when your White partner takes out their wallet is not a 'microaggression'. This can be quite intimidating even for established professionals from a regular socio-economic background. So, contrary to what the CRED report suggests, no matter how successful I seem to be, the racial discrimination is very real, sadly and it is neither a bias nor very unconscious.

Growing up, pandering to White fragility as taught by our older generations in order to 'keep the peace' has forced us to examine our outlook on several issues in the world around us. We thought we would empower the next generation with positive messaging and build a safer, more equitable society for our children so they would not need to bow down to racial discrimination, so when my daughter asks why she gets singled out for the colour of her skin it is a bit of a disappointment to see structural and interpersonal racism alive and well. It then becomes difficult to stop passing down the internalised survival instinct to lie low that has been reinforced by the institutional racism that I experience in my own world.

The overwhelming outpouring of disappointment and negative response generated across the country from not just my ethnic minority counterparts but also many a rational person who has read the CRED report irrespective of their ethnicity is testament to its lack of standing in the community. The main hurdle with institutional and structural racism is that it gaslights you, so awareness and open support from an early stage is crucial! We need more widespread understanding that people can perpetrate abuse towards certain individuals even when they do not have issues with others.

So much has already been said about extant racial inequities in society and healthcare; the latest CRED report appears to provide a convenient justification, an 'honourable' exit for those wanting to shirk their duty to make essential changes happen, for those wanting the status quo to remain in place. It is up to every one of us to reject this poor excuse for a report that insults our collective intelligence and demand one truly worthy of our inclusive nation. We need to lead by example and support each other at work or in society to be able to speak up and stand firm when in these situations so we can get rid of all forms of racism from being perpetuated.

We cannot accept a #NotAll excuse for racism, we need it to be #NotAtAll!