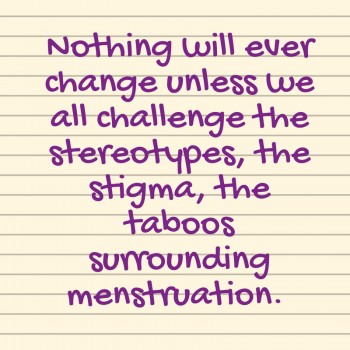 This week we have been joined in the new Engender office by Livi, a student on a work experience placement from Holy Rood RC High. While here, Livi has written a piece on period shaming, an issue which she has previously researched at school and feels strongly should be more widely covered.

So, a woman told you what to do. She ordered you about, suggested a different approach. Maybe that makes her annoying. Maybe you’ll complain. Maybe it makes her a bossy bitch. Or, maybe, you can’t deal with a woman taking charge. No, that can’t be it. She’d have to be crazy to think she’s more competent than you. She’s definitely on her period.

Ridiculous, right? Unfortunately, this sexist belief that women are somehow inferior because of one of their bodily functions, creates a culture of shame and ignorance. Girls grow up believing their hormones are their enemies but it’s a war that’s waged silently and shamefully.

Periods are a natural process but we're taught to hide them and be ashamed. As young girls, we subconsciously learn that we're wrong and dirty for bleeding out of our vaginas once a month; or, at the least, that it is excruciatingly embarrassing. If advertisements hush up the truth, so must we. If they can show us that "life looks great" on our periods, show us images of female empowerment, why do they advertise menstrual products as "discreet", "scented", always geared to hide our periods? Why do they say 'be proud of your womanhood' without actually letting us? We're shown blue liquid – we don't bleed ink. The first advert to show red "blood" was met with disgust though, thankfully, also positivity and hope for the future. The national curriculum requires us to be taught about the "menstrual cycle (without details of hormones)". Nothing else is specified. This gives schools free rein and many choose to teach little more than the basics.

Believing that we should hide our periods contributes to widespread stigma in society and the workplace. A study by the fertility app Clue found that 68% of women don't feel comfortable speaking to men at work about their periods, which means many women suffer from empty or "correct change only" tampon dispensers, or even workplace discrimination, in silence. Dominique Christina wrote a poem after she saw a tweet “I was having sex with my girlfriend when she started her period, I dumped that bitch immediately”: a perfect example of the societal disgust surrounding menstruation. She addressed the poem to the "nameless dummy on twitter", telling him he was the reason her 13 year old daughter cried when she started her period. She told her daughter to "bleed, and bleed, and bleed all over everything he loves, period." Period indeed.

These taboos can mean women don't know about their own bodies. The education about periods is minimal. It ties into a different issue of inadequate sex education, but if you're lucky you're shown how to put a condom on a banana. For menstrual products there's no education about how to use them. If you're lucky, relatives will explain it but if not, you could have no clue about how to be hygienic and to maximise your comfort while menstruating. My personal education (which all came from relatives and a book I was given) did not cover reusable menstrual products - I did not know they existed until I researched this essay which shows how often any school education you receive is run by menstrual product companies. Re-useable products aren’t profitable.

Period poverty is also a major issue in Scotland. A survey taken by the Free Period Scotland campaign found that 8% of women have problems getting menstrual products, 4% can’t get any menstrual products and over 20% of women haven’t been able to go to their work or education because of their period. Then, in these places, you’re lucky to find any dispensers. The Educational Institute of Scotland’s Education and Equality department are reviewing how education offers menstrual products and have already found dispenser machines have been left out of newly-built colleges and unisex toilets, which are becoming more common. Happily, change is coming. Monica Lennon MSP is drafting a Member’s Bill to be put forward in Parliament that calls for free provision of menstrual products in Scotland in places like schools, colleges and universities, which will enable women to be comfortable while menstruating without having to spend all that money. At City Glasgow College, a packet of menstrual napkins cost (before the student union put in a funding proposal) £2, when production cost was 5-6pence per napkin!

This treatment of periods isn't just about periods – it represents the shaming and ignorance of everything about women. Attitudes towards women's bodies hold us all back. Disgust towards our natural functions is rife – breastfeeding is an example of this. Breasts' natural purpose is 'unacceptable' in public and must be stopped. Responses to abortion rights also show how our bodies aren't ours to control, that they belong to others who should have no say in the matter. Photoshopped images of women mean that we literally aren't ourselves in much of the media we see. Why not go the whole way, people? Say what you mean: real women are unacceptable – just like menstruation.

Period shaming is a serious problem. I experience it all the time. It comes from me and others. As much as I hate to admit it, my period is still something I whisper about in corners with my closest girlfriends. I am working to change this. I don't hide my pain and discomfort. If I want chocolate, everyone will know. Nothing will ever change unless we all challenge the stereotypes, the stigma, the taboos surrounding menstruation. Girls, we must be proud of our periods. "When you deal in blood over and over again like we do, when it keeps returning to you, well, that makes you a warrior" as Dominique Christina wonderfully puts it. Guys, deal with it.

I’ve loved working here at Engender HQ for my work experience. I couldn’t have chosen anything better! I may have sliced my finger open on an archive box, but overall it’s been a great experience. Taking over the Twitter page and answering many questions on feminism (especially in young people) and writing this blog (which I took from an essay I wrote for school) have been highlights. Feminism is so important to me, and I’m always trying to further my knowledge. This week has really helped me and I know I’ll be taking what I’ve learnt and annoying my friends with it! When I told them I was coming here for work experience, most of them rolled their eyes and said ‘You would go somewhere like that!’ I’m going to go on about this week for ages.