GUEST POST: Notes from the classroom - Prevention work in the Highlands 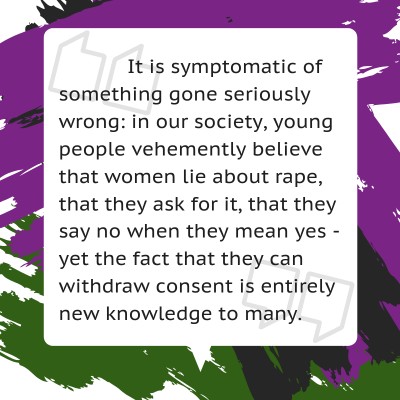 Lindsay Linning is the campaigns and sexual violence prevention worker at Rape and Sexual Abuse Service Highland (RASASH). Through the national Rape Crisis prevention programme she leads workshops in senior schools in the Highlands on topics such as consent, pornography and gender. She also is coordinating the roll out of a new educational prevention resource for use with learning disabled young people called No More! and works with young feminist ambassadors in different parts of the Highlands. Here, she writes on her prevention work in the classroom.

The cards lie face up on the classroom tables and I wander the room while students in small groups confer with one another in hushed tones.

True or false? Women often lie about being raped.

True or false? If a woman is wearing revealing clothing and is raped, she’s partly to blame.

True or false? Sometimes girls say ‘no’ when they mean ‘yes’.

The five or six minutes they are given to discuss a total of ten statements gives me enough time to mentally revise the set responses I recycle to groups of teenagers on a weekly, sometimes daily basis in my role as a sexual violence prevention worker in the Scottish Highlands. With every new group of students, I wonder if they’ll surprise me: could it be that there are young people in this room who disagree with the statements? Young people who’ve somehow resisted by their own volition, or received adequate education, to not parrot back misogynistic, victim-blaming beliefs which testify to the power of a patriarchal system so effective in recruiting its subjects still in childhood? Often, my wonder is short-lived. Invariably a chorus of affirmations around the room prompts me to commence my series of counter-responses, yet again. I rattle them off, trying to keep the young people on side. False allegations are no more common for rape than for any other crime. As a man you are more likely to be raped than falsely accused of rape. Clothing has nothing to do with the abuse of power intrinsic to rape: women and girls across cultures regardless of dress are raped. The ‘no means yes’ argument is nothing more than a rape culture reinforcement that men know what women want better than women themselves do. And so on. It’s hard to make this stuff entertaining for them, particularly when it undermines myths held as absolute truths in their heads until this point.

Sometimes I ask the students to complete written feedback forms detailing their views on the workshop. There’s a question towards the end of each form: ‘What is one thing you’ve learned today?’ So many of them write a variation of the same thing: ‘That you can withdraw consent at any time’. It is symptomatic of something gone seriously wrong: in our society, young people vehemently believe that women lie about rape, that they ask for it, that they say no when they mean yes - yet the fact that they can withdraw consent is entirely new knowledge to many.

‘What about the boys?’ I hear, from school staff and students alike. Our workshops take an overtly feminist analytical approach to sexual violence and its root causes. Such an approach necessitates acknowledging that a violent, patriarchal culture benefits nobody. Men and boys are not exempt. Men and boys survive sexual violence too. But why is there such resistance to paying greater attention to its ramifications for women and girls who are disproportionately affected by sexual violence, disproportionately at the hands of men? I’ve heard all the derailing tactics available – ‘what about the boys?’ is just one of many. People like to throw curveballs to absolve men of responsibility for their abuse. Anything to avoid taking ownership. ‘Yeah, but what if he’s drunk too, how’s it his fault?’ If your drunk friend shot someone dead, would you be so quick to defend his innocence? More derailing. ‘Yeah, but it happened to my brother’s mate’s cousin. The next day the girl changed her mind and claimed he raped her’. Were you in the room at the time it happened? No, you’ve never met your brother’s mate’s cousin. It’s amazing how easy it is to believe him and how hard it is to believe her.

What about the girls, I wonder? How it feels for them when I summon the names we use for a female who enjoys sex. The mass alliterative hiss of ‘slut… slag…’ that sounds through the classroom. Guttural proclamations of ‘frigid… virgin…’ follow when I ask what we might call a girl who doesn’t want sex. The construct of dichotomous female sexuality is nothing new, but talking about it in the classroom certainly is. Girls often write on their feedback forms that the sessions help them, that there needs to be more of these discussions in schools. Some, however, resist or protest the messages of the workshops. I remember well the internalised misogyny of my teenage years. When I thought that prostitution was no problem between consenting adults, because, well, people make choices, don’t they? When I thought that those men invading our bodies in public, preferably uniformed, with their eyes straining and their necks craning, their words demeaning, that they were building our self-esteem, a sense of worthiness in the female adolescent aesthetic pecking order. How easily inured we as girls become to hatred directed towards females, towards ourselves.

Questioning our conditioning and the systemic nature of sexism and sexual violence at a young age can be disconcerting. It’s inconvenient and above all, it’s a lonely place to stand regardless of how old you are. I know why many don’t - it’s easier not to. Sometimes you have to block out the worst bits to get by in the day to day. We navigate our existence within a rape culture in the ways we know how. But I also know young people who do question it all. They upset the system, speak out and make noise. And so, for every obstacle in my path as a sexual violence prevention worker, they give me a reason to overcome it and persevere.
Posted on February 12 2019 at 15:47