To mark the release of Engender's new report, What Works for Women: Improving gender mainstreaming in Scotland, we're sharing how mainstreaming is important to the work of some of Scotland's equalities organisations. Here, Carol Young from the Centre for Racial Equality and Rights (CRER) talks about how they use an intersectional approach in their mainstreaming work.

Why is gender mainstreaming important to your organisation?

While CRER is an anti-racist organisation and our work is primarily focused on race equality, we adopt an intersectional approach where possible. People’s identities are multifaceted, and everyone has multiple protected characteristics, so it's not feasible to get mainstreaming right for one characteristic without considering the others. 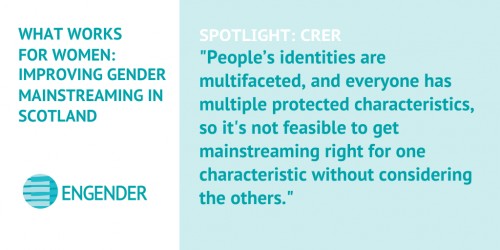 What area(s) of mainstreaming are you focused on?

We focus on all aspects of mainstreaming, with particular attention to race. We produce guidance for public bodies on the Public Sector Equality Duty (PSED), which includes mainstreaming activity. We previously delivered an in-depth Mainstreaming Equalities Organisational Development Programme for voluntary sector leaders, along with our partners at GCVS.

If you could snap your fingers and change one thing to make gender mainstreaming happen, what would it be?

We would want public bodies to have a better evidence base and to use the evidence they gather in mainstreaming equality. If public bodies produced detailed intersectional data, this would aid identification of gaps in equality mainstreaming and allow targeted interventions. Inequalities for minority ethnic women are worse than for minority ethnic men on most issues, but the situation varies widely between different ethnicities. The more detail, the better!

Where can people find out more about your work on mainstreaming?

You can find out more about our work on mainstreaming by looking at the publications section on our website. We also maintain a PSED portal which outlines the reports and data published under the public sector equality duties by public bodies in Scotland.