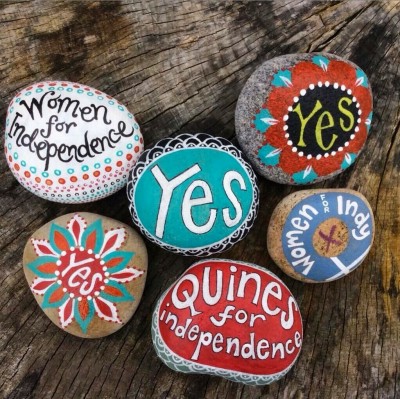 A Yes vote in the referendum opens the door to a more equal society for Scottish women.

In deciding to vote Yes on the 18th of September, I’m under no illusion that we will suddenly have a Scandinavian-style democracy with decent childcare, lots of bicycles, and someone like Borgen’s Birgitte Nyborg as our First Minister by the 19th of September. But I do believe choosing independence gives us the tools to start building a society that addresses and strives to end gender inequality in Scottish workplaces, wider society and its power structures.

Affordable, world-class childcare is one of the central tenets of Scotland’s Future, the White Paper on Scottish independence. We desperately need a fairer and more affordable childcare system in this country. But childcare is not just an issue for women, and it’s certainly not the only issue for women in this referendum.

Deeply entwined with the need for families to find suitable caring arrangements for their children is the need for a transformation in workplaces across the country. Better childcare is only one facet of the economic changes required to redistribute Scotland’s wealth more equally across her sons and daughters.

By voting yes, we can begin to address economic inequalities of work and earnings. Instead of looking to the City of London, we can embrace new and sustainable economic drivers, from the giants of green energy to successful small businesses. Placing economic levers, tax policies and employment rights in our own hands gives us the tools to make sure employment works in women’s interests. More skilled and properly paid part-time jobs. Parents and carers able to fit work around their responsibilities, rather than fitting their responsibilities to the demands of their jobs. And control over a benefits system where current cuts have a disproportionate negative affect on women.

Arguments for remaining in the union urge small, achievable changes for women within the confines of the current system. While polls indicate women are cautious in their approach to the referendum, with a 6-7% gap between men and women in voting intention, what I’ve witnessed through the Women for Independence campaign is a growing confidence and urgent desire for women across the country to get involved in the referendum campaign and make sure their voices are heard.

While the media debate rages on between suits and currency unions, elected politicians and warships, on the ground the grassroots campaign is developing roots, tendrils and fresh green shoots.

At the Engender Constitutions Cafe last month, I talked to women who explored what a Yes vote could mean. As carers, mothers, immigrants, activists, workers, students, retirees – all the roles a woman may take on during her life. Scottish women are not, and have never been, a homogenous entity with identical interests and concerns. But what is clear is the shared recognition that the referendum offers a new platform for women on both sides (and neither side) of the debate to explore together what kind of Scotland they want to build.

Women for Independence now has over 1,000 members, with over 40 local groups from Shetland to Dumfries. And as Jeane Freeman said: "Whatever happens after the vote, we won't be able to put that genie back in the bottle".

At present, Scotland is represented in Westminster by 59 MPs, of whom 13 are women. Members of the Scottish Parliament are 34% female, but that’s a decrease since a high of 39.5% in 2003.

Changes in our power structures must deliver changes for gender equality as well. Women’s caution for the referendum as described above may in part be a canny reckoning of the dangers of new boss same as the old boss: a Yes vote in itself doesn’t promise a better and more equal outcome in our power structures.

But what this referendum does offer is an awakening. Let’s not settle for small changes at the House of Commons. Let’s not be content with the election of just three or four more women every five years.

Instead, let’s take these voices you might be starting to hear. The blethering in the workplace. The chats at the school gate. The women chapping on your door and asking how you think you might vote in the referendum. Let’s take those voices, and not just look at those who might represent us at the highest levels, but at all levels of government, the law, the state. Let’s vote Yes on 18th September, recognising that it’s just the key to the door, and that other struggles and battles will undoubtedly follow in the months and years ahead. But let’s give ourselves the tools and power and confidence we need to start to build a more equal Scotland.

Kirsty Connell is an activist for Women for Independence. She works as a Fundraising Manager in the Scottish charity sector. You can tweet her @kirsty_c.

The photograph that illustrates this post was taken by Gillian Martin, and is used with permission. The stones were painted by Lindsay Allardyce.