Today we're publishing the second in a series of blogs from two student placements Engender is hosting from the University of Strathclyde Applied Gender Studies and Research Methods course. These blogs explore women's representation and decision-making around women's equality in local authorities across Scotland. You can see other blogs in the series here. 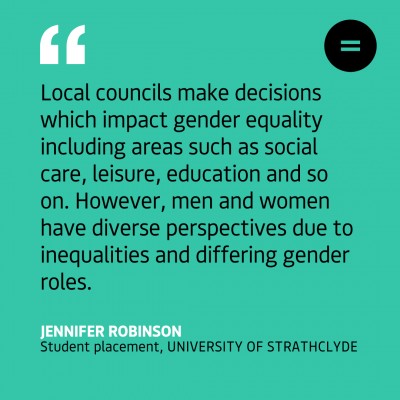 I never imagined that I would be studying for a Master’s degree from the comfort of my own home in Paisley. One perk is being wrapped in a big cosy blanket and pouring myself endless cups of tea while I read about various feminist topics. I am also excited to be undertaking a placement with Engender as part of my degree.

The placement aims to build upon Engender’s Sex & Power report 2020 which showed an overrepresentation of men in positions of power. Particularly, the report found that women made up only 29% of elected councillors at the local authority level. Local councils make decisions which impact gender equality including areas such as social care, leisure, education and so on. However, men and women have diverse perspectives due to inequalities and differing gender roles. Therefore, if councils are dominated by men, they cannot provide diverse representation for their residents. The placement will include a gender audit of representation in local authorities and their policy areas. I will be investigating representation and policy within Renfrewshire Council (my own local authority) and Edinburgh council and documenting my findings through a series of blogs.

Firstly, I wanted to count the number of councillors who were women within Renfrewshire and Edinburgh and compare this to the numbers from the previous council election which took place in 2017. I then looked at the numbers of women in each party and each ward today. Gathering these numbers illustrates the lack of women’s representation within each local. I have broken down these numbers in the following sections.

Number of councillors by political party in 2021:

Number of councillors by political party 2021:

I then looked at elected councillors for each ward. There are 17 wards in the Edinburgh council area. Only 2 out of the 17 wards has equal gender representation. Three of the wards have no women elected meaning that the residents of those areas are represented by men only. The rest of the wards had one woman out of three of four elected councillors. Like Renfrewshire Council, both the Edinburgh council leader and depute leader are men.

It is important to note that these numbers are based on women and men alone and do not encompass the intersections of race, ethnicity, disability, sexual orientation and other groups. These numbers provide a snapshot of women’s representation in Renfrewshire council and Edinburgh council. Although there has been an increase of women elected to both councils, it is marginal. The continuation of men’s dominance in these local authorities is a disservice to residents as they are not provided with diverse representation. Furthermore, this could affect how women interact with councillors. For instance, women may feel uncomfortable discussing sensitive issues such as gender-based violence with men on the council. So, overall, it is disappointing to see the perpetuation of men’s dominance and underrepresentation of women at the local authority level.

I was also curious to see what would appear when I simply typed the word “gender” into the search bar of the council websites. In Edinburgh Council, their “Equality and Impact” documents appeared which included their policy on equal pay. In Renfrewshire council, their “No to Gender Based Violence Strategy 2018-2021” appeared. Interestingly, Renfrewshire was one of the first councils in Scotland to introduce a Domestic Abuse Policy for staff. I then searched the word “women”. In Edinburgh the following article appeared, “Putting the safety and wellbeing of domestic abuse victims at the heart of our housing approach” which describes Edinburgh council’s new Domestic Abuse Housing Policy. In Renfrewshire, information for Women and Children First appeared which included the referral process and contact details. I will continue to explore these policy areas further and I look forward to discussing them in my next blog posts.