Today we're publishing the next in a series of blogs from two student placements Engender is hosting from the University of Strathclyde Applied Gender Studies and Research Methods course. These blogs explore women's representation and decision-making around women's equality in local authorities across Scotland. You can see other blogs in the series here. 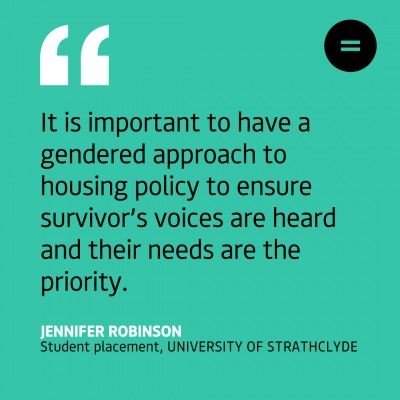 As part of my Msc Applied Gender Studies and Research Methods I am undertaking a placement with Engender to research gender equality within Renfrewshire Council and Edinburgh Council. In my previous blog post I explored Renfrewshire council’s gender-based violence policies and funding decisions. In my final blog post I will outline Edinburgh Council’s Domestic Abuse Housing Policy, their council budget and transport policies.

Domestic abuse is the primary cause of women’s homelessness in Scotland. However, presenting as homeless can be traumatic and stigmatising meaning that many women remain in an abusive relationship and avoid seeking support. A report by Women’s Aid found that housing was a key barrier to women leaving an abusive situation. Concerns around housing included: inability to cover the costs of new accommodation, fear of homelessness or unsafe housing, no support from local housing staff and difficulties finding a landlord who would accept state benefits for rent.

Scottish Women’s Aid undertook a research project with Fife Council entitled, “Change, Justice, Fairness”. The report identified issues encountered by women experiencing domestic violence. That is, women felt a sense of injustice when they had to move while the perpetrator remained in the family home. Women and children also face the financial and emotional burden of losing their home. Further, the research found that women had little agency in housing options and that housing staff tended to lack knowledge around violence against women. Findings from the report were similar to the issues faced by women experiencing domestic abuse in Edinburgh.

Edinburgh Council’s Domestic Abuse Strategy and Improvement Plan (2017) highlighted the need for flexible housing options that are not procedure driven but person-centred and that survivors should define safe spaces rather than the service. The strategy also highlighted the necessity for housing staff to understand domestic abuse. In May 2020, Edinburgh Council published their Domestic Abuse Housing Policy.

A gendered definition of domestic abuse has been adopted in line with the Domestic Abuse (Scotland) Act which covers multiple forms of abuse including coercive control. Edinburgh Council’s policy understands that domestic abuse is disproportionately perpetrated by men and disproportionately experienced by women and girls. The policy further aims to support LGBT+ individuals and men who have experienced domestic abuse and acknowledges the intersecting needs of BME people, people with disabilities, LGBT+ people and so on. Training is also being provided to Council Housing Officers, staff within homeless services and registered social landlord staff to help them respond appropriately to domestic abuse, understand diversity and sexuality and access resources and services.

At the time of this policy, the Edinburgh Council leader wrote to Scottish government calling for an update in legislation to make it easier to evict perpetrators from the home instead of removing survivors unjustly. Importantly, in 2015 Women’s Aid called for a change in legislation in their Change, Justice, Fairness report. Recently in March 2021 the Scottish Government passed the Domestic Abuse (Protection) (Scotland) Bill. This provides the police and courts the power to remove perpetrators from their home. Women and children can now remain at home with their family and friends while men are held to account for their actions.

However, local authority funding commitments are also necessary along with gendered policies in order to progress towards gender equality.

The Edinburgh Council budget presented on their website does not mention support for women anywhere. Therefore, I sent a freedom of information request to find out how much funding went to supporting women around gender-based violence. The council were unable to provide me with such information. This creates a barrier to gaining funding information that affects the life of women. Budgets must be gender mainstreamed to reflect the different needs of women and men and this should be included on the funding list on the Edinburgh Council website. Providing information about how budgets impact women ensures transparency and holds local authorities to account for their funding decisions. To progress towards gender equality, we need to see financial commitments.

Like Renfrewshire Council, Edinburgh’s Local Transport Strategy does not mention women or gender despite the gendered differences in transport use. Particularly, public transport is a site for sexual harassment. Also, like Renfrewshire Council, Edinburgh do not mention women or gender in their cycling plans. Cycling is more attractive to men than women. Reasons for this include concerns around personal safety as some cycle paths are remote, have little lighting or are surrounded by bushes which decrease visibility and make the path feel unsafe. Furthermore, female cyclists face sexual harassment and abuse from men on the streets (Guardian, 2019). If we want women to feel safe in the streets, on public transport and in their homes then gender has to be considered when developing transport policies as well as housing policies at the local authority level.

Edinburgh Council’s Domestic Abuse Housing Policy is encouraging as women have been largely left out of housing policy. It is important to have a gendered approach to housing policy to ensure survivor’s voices are heard and their needs are the priority. However, gender must be considered in every policy area and the lack of information regarding the council budget is frustrating. Gender-specific policies are great but gender mainstreaming throughout other policy areas along with financial commitments is vital if we want equality.