Dr Shridevi Gopi-Firth is a Speciality Doctor in Eating Disorders working in Scotland. Her international education and career, including third sector work across India, Russia and the UK have given Shri a wide exposure to diverse cultural, social, educational and healthcare settings, thus successfully complementing her lived experience and clinical skills to develop a holistic understanding of the person. Here, she explores how stigma around eating disorders can affect women in BAME communities. 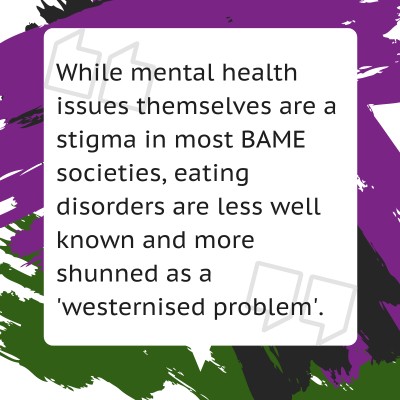 Eating – the most basic need of all things living, from the prokaryotic amoeba to the Dalai Lama. So when this signal in the brain gets scrambled and the eating becomes disordered, the inevitable reaction of the general populace is confusion, indignation, frustration and pity – empathy is a far way off since one cannot truly understand what causes a person to turn away from this basic need. This is never more pronounced than in Asian and African cultures where food brings people together and is the centre of every festival and get-together, big and small. Food is serious business in these cultures – I mean, in Asia alone, there are several deities devoted to food, the growing of it, the eating of it, the digesting of it, the gifting of it – one does not mess around with the concept of food!

Growing up in India, I noted that food equated to comfort, reward, love and several other social schemas that are ingrained in the culture. Conversely, the respect and importance given to food in society also meant that it was a tool used to gain power, show off opulence, declare protest, manipulate people, etc. as seen on TV...quite literally! Thus, food was always a loaded concept – it was either a divine blessing one should never refuse even if second and third helpings were heaped upon us, or it was the other extreme that one could declare protest with by depriving oneself of food by fasting as it was a non-violent form of protest as demonstrated by the Greats like Gandhi.

Perhaps it was this acceptance about how disordered eating is treated that I noticed even after I migrated to the West as a teenager that subconsciously continued to exist as part of the South Asian culture. While mental health issues themselves are a stigma in most BAME societies, eating disorders are less well known and more shunned as a 'westernised problem'. 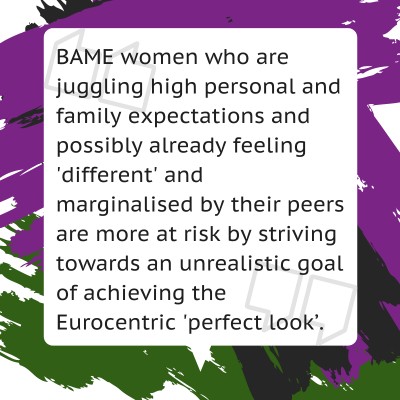 Asia is certainly globalised now and although diversity was always present, the current generational values among Asians sway towards a westernised social construct of 'thin is beautiful'. Social media usage is just as rampant globally and dysfunctional attitudes and self-esteem issues go hand-in-hand with that. This has led to a spike in the same eating disorders as it has in the West. Unfortunately, where the West has taken steps to acknowledge this and manage the issue in some way at least, Asian communities are slow to accept the problem and outright reject the issue at times.

Despite fairly good assimilation amongst most British BAME migrants otherwise, unfortunately the overall approach to mental health issues and eating disorders in particular appears to be similar to what happens in Asia due to the cultural acceptance and/or taboo of these issues. However, while back in Asia, there are policy-makers trying to bring forth nationwide changes to public health, here in the UK these communities are in the minority and harder to reach and support.

Add to the mix, some of the uniquely specific risk factors faced by BAME women in the UK:

Thus, the BAME women who are juggling high personal and family expectations and possibly already feeling 'different' and marginalised by their peers are more at risk by striving towards an unrealistic goal of achieving the Eurocentric 'perfect look' while essentially having an Asian/African ethnicity. If you ask any woman of colour how difficult it is to shop for a decent foundation shade in the UK, let alone get a decent group photo with her colleagues without getting blacked out, and not have serious questions about body image at times, you may begin to understand some of the issues that could drive BAME women to disordered eating behaviours!