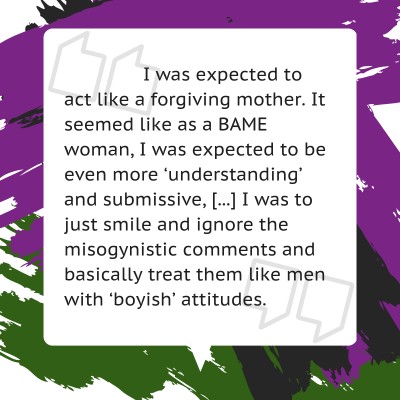 Azita is originally from Iran and has lived in the UK for over 20 years. Her recent background is in human rights and she has worked in various sectors including education, charities and telecoms. Writing is one of her passions, where she feels she can reach out and connect.

In this post, she explores the links between religion and patriarchy, and reflects on her own experiences as a BAME woman in Scotland.

A few years ago I went back to university to study human rights and as a part of it I prepared my dissertation in the dynamics between women’s rights, globalisation and some religious beliefs about gender. Being a woman who considers herself a feminist, and originally coming from a religious country, this was an important topic to me.

Although I had never studied humanities previously, that research paper did very well, which made me proud. Because of the constraints of my study, I chose to research Christianity and Islam; as these are the two largest religions in Scotland, and ones where the role of women is often discussed, this gave me a lot to consider.

It seems to me that feminism is still a taboo among BAME communities, even in the West. I have noticed that when a woman stands up for her rights, especially if she complains that a man has shown misogynistic behaviour towards her, she is branded with the ‘man-hater’ title.

That is why I decided to share parts of my dissertation and my personal experiences, in order to challenge this misconception. I stand up for women’s rights often, but I certainly don’t hate men. I adored my father, perhaps even more than I did my mother. Growing up, I got on well with my brothers, definitely better than I did with my sister, and in workplaces, I have generally (not intentionally) collaborated better with male colleagues. So, I find the accusation of being a ‘man-hater’ at best a childish and otherwise an offensive remark.

I would like to start by pointing out the views of a few feminist and theological writers, who explored the intersection between some religions and women’s rights.

Mary John Mananzan claims that the misogynistic attitude of the fathers of the early Church, in spite of the respectful and humane way Jesus treated women, became the basis of how women would be thought of and treated for centuries. She brings several examples including one from St Augustine: 'We are men, you are women, we are the head, you are the members, we are masters, you are slaves'. She suggests this type of attitude towards women in the late and early Church has contributed to the stereotyped ideas about women including their 'susceptibility to victimization'.

This is also documented as acts of violence against women during the inquisition, Mananzan highlights. Inquisition (as defined by dictionary.com) is ‘The court established by the Roman Catholic Church in the thirteenth century to try cases of heresy and other offenses against the church. Those convicted could be handed over to the civil authorities for punishment, including execution’.

Mananzan reports that women who did not fit the roles allocated to them by the Church were hunted and even burned by the inquisition. The most modest estimate was that about 2 million women were killed, after being tortured between the 12th and 17th century, including Joan of Arc.

On Islam’s effect on women’s rights, Anna King states that in early Islam until right after the death of Prophet Muhammad (PBUH), women enjoyed participation in all community affairs, but later on Islam moved away from the Quranic teachings about women and started to seclude and silence women.

Ann Mayer analyses the varied approach to women's rights taken by different Muslim-majority countries and concludes that in all of these approaches, women are not acknowledged or treated like 'fully equal human beings' who deserve the same rights as men. The reader is reminded that this treatment of women is contrary to the way Prophet Muhammad (PBUH) treated women, including his wife Khadija and his daughter Fatima, as it is well-documented in Islamic literature.

Jane Bayes and Nayereh Tohidi argue that it is because of so-called feminine functions namely 'motherhood, domesticity and nurturing' that women are seen as less logical and weak, and hence unable to participate in public or political activities in their own right; they can only act in a 'complementary' role to men, not as equal to them.

I believe that the nurturing and motherhood roles, which are associated with women across the centuries and cultures, have indirectly given rise to the belief about feminists being man-haters. This is because when a woman is not nurturing or ‘mother-like’ and instead she is assertive, asking for her rights and perhaps looking annoyed or angry, she seems like a ‘mad-feminist’ or ‘man-hater’ to some of the believers of above mentioned religious beliefs.

In my opinion, women who are afraid of feminism and have accepted their role as only complementary to men’s, criticise themselves and other women for not having the characteristics that misogynistic men like them to possess. Some examples of this attitude would be: women calling each other ‘fat’, if not model-like thin; ‘aggressive’ for being assertive; and ‘not good wives or mothers’ for concentrating on careers.

I have found that when I raised issues regarding male colleagues, mostly from the Middle-East or Asia to my male managers, where colleagues were acting in a misogynistic manner, not only the issue didn’t get resolved properly but it caused my male managers, who previously had good working relationships with me, to start suspecting me of being a man-hater!

I was expected to act like a forgiving mother. It seemed like as a BAME woman, I was expected to be even more ‘understanding’ and submissive, which represents the intersectionality of racism and sexism. I was to just smile and ignore the misogynistic comments and basically treat them like men with ‘boyish’ attitudes, even though the comments had made me lose my self-confidence, at least temporarily, and left longer-lasting marks subconsciously. That is what these kind of negative comments, that are usually about looks, age, size, or level of intelligence, do to women.

Among BAME women and men, the intersectionality of religion or culture and sexism have caused further prejudicial behaviour like this. As explored above, misinterpretations of most religions also has caused further hatred towards feminists.

Additionally, it should be stated that women’s rights have been impacted negatively regarding their equality within the society, by the way religion has told women to behave. It is worth mentioning that women in Glasgow recently had to protest against pay inequality after decades of unfair treatment while performing the sorts of caring, nurturing roles that we are expected to perform.

I would like to leave you with a thought-provoking quote by Anna King presenting the intersectionality of politics and women’s rights, as:

“Islam is no more and often less oppressive to women than most world religions, and that religions like ideologies are used to justify and maintain control in a particular social structure, whether that of capitalism, feudalism or patriarchy”.