Today we're publishing another post in the series of blogs from two student placements Engender is hosting from the University of Strathclyde Applied Gender Studies and Research Methods course. These blogs explore women's representation and decision-making around women's equality in local authorities across Scotland. You can see other blogs in the series here.

Katie Young graduated from the University of Glasgow with a degree in English Literature in Summer 2020, and is now studying a Master’s degree in Applied Gender Studies and Research Methods at the University of Strathclyde. She is passionate about women’s fiction and empowering girls and young women to fight for gender equality in Scotland through volunteering with Girlguiding, and tweets under @katieeey. 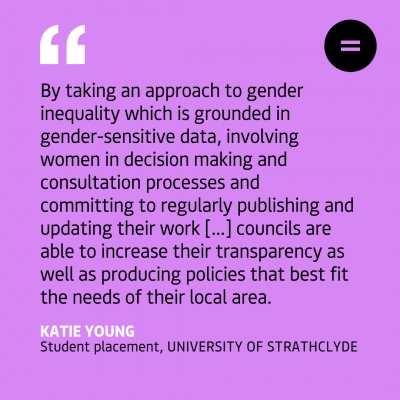 In my research, I identified some issues with the way that both councils conduct and implement Equality Impact Assessments within their work. Both councils make a clear commitment in their guidance to promote equal opportunities and encourage full participation in the local community, and have signed up to the Fairer Scotland Duty which was introduced by the Scottish Government to commit to reducing socio-economic inequality as well as reducing inequalities for those with protected characteristics mentioned in the Equality Act (2010). However, what this means for women in particular and working to eradicate the inequalities they face is less clear. In many of the Equality Impact Assessments I read, the impact of new policies and procedures was rarely considered in relation to gender, and gender-sensitive evidence to emphasise the need for the policies and their impact on women was not mentioned. This suggests that in these local authorities, gender is not a high priority in their equalities work, and that there may also be a lack of evidence to suggest its relevance to council decision making.

West Dunbartonshire have published Equality Impact Assessments on their website, although this does not appear to have been updated since October 2019. There doesn’t seem to be an obvious reason for this, although it could be that equalities work has been pushed aside over the last year to divert resources to handling the impact of the Covid-19 pandemic on the local community. Of the most recent Equality Impact Assessments published online between June 2019 and October 2019, the most common proposed policy themes were improvements to local parks and facilities, building greater links across the council area between Clydebank and Dumbarton, and internal process on records management and support for council staff. Of the 14 Equality Impact Assessments published online in 2019, only four mention the impact of the proposed policy on gender inequality: one to account for physical differences in providing new furniture and equipment in care homes, one which noted that women were underrepresented in town planning and a conscious effort had to be made to improve this, a commitment to upholding the guidance set out in the Gender Recognition Act when updating records management processes, and one that suggested that the council were doing well in addressing gender inequality as a higher number of women were employed as staff. In all of the assessments, there was little evidence that showed how intersectional inequality had been considered in the decision making process

Argyll and Bute’s Equality Impact Assessments, although far more up to date than those in West Dunbartonshire, raise similar issues surrounding the way they consider the way that their policies work to mitigate gender inequality. As I had more data to consider in Argyll and Bute, who have published Equality Impact Assessments up until February 2021, I focused specifically on those that were published in 2019 to compare with the data published by West Dunbartonshire. Of the 13 Equality Impact Assessments published between January and October 2019, policies focused broadly on education, road maintenance and the environment, and spending and budget plans for the forthcoming year. Only one policy, which proposed cuts and a restructuring of council spending on community learning and development programmes for adults and young people considered that proposals may be worsening gender inequality in the local area due to the reduction in the activities and support that this service would offer. This impact is not named, however, suggesting that there may be a lack of gender-sensitive data used in putting the policy together and when carrying out the continuous monitoring that is intended to mitigate inequalities that may be exacerbated by the cuts. Furthermore, this specific policy may have a greater impact on women who are marginalised in other ways, such as by their socio-economic status or location within the local authority, but these intersectional factors are not considered in the Equality Impact Assessment process.

As both councils have publicly stated their commitment to reducing inequality within their area, working on improving the way in which they monitor equalities and carry out Equality Impact Assessments specifically in relation to gender would be a great contribution to this work. By taking an approach to gender inequality which is grounded in gender-sensitive data, involving women in decision making and consultation processes and committing to regularly publishing and updating their work in light of this, councils are able to increase their transparency as well as producing policies that best fit the needs of their local area.