GUEST POST: Decriminalisation of Abortion for a Modern Scotland 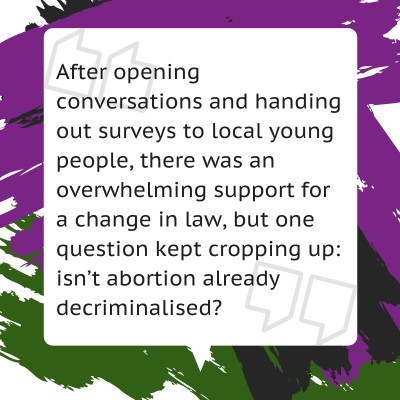 Following the passing of a motion in support of decriminalisation of abortion during the Scottish Youth Parliament's virtual motion debates this spring, MYSP's Emily Harle and Erin Campbell have written for us on why access to abortion is an important issue for Scotland's young people.

Emily Harle (she/her) is a Trustee and member of the Scottish Youth Parliament (MSYP) for Glasgow Kelvin, and Erin Campbell (they/them) is an MSYP for Midlothian North and Musselburgh, and the Deputy Convenor of SYP’s Equalities and Human Rights Committee. The Scottish Youth Parliament is the democratically elected voice of Scotland’s young people, aged 12-25. You can read more about SYP here, and follow them on Twitter @OfficialSYP. You can also follow Emily @EmilyMSYP, and Erin @syperincampbell.

In 1861, the Offences Against the Persons Act passed and abortion became a criminal offence in the UK, with women facing a penalty of life imprisonment for terminating a pregnancy. This outdated law was never overturned. The 1967 Abortion Act, which is commonly said to have legalised abortion, did not fully decriminalise it. Instead, the law provided an extremely strict set of criteria under which the procedure would be permissible, including a requirement for two written doctor’s signatures to confirm that continuing the pregnancy would severely damage either the mother or child.

This legislation was implemented to prevent unsafe backstreet abortions, which were rising drastically during the sixties; a quick fix that worked about as well as a plaster over a broken bone. Though the amount of unsupervised abortions decreased, the law merely provides a defence for doctors performing abortions and does not decriminalise the procedure or nullify pre-existing abortion legislation. Therefore, if the conditions of the 1967 Act are not met, then a woman can still be prosecuted for procuring an abortion. This threat is remote, but real: due to barriers in accessing safe abortions, some women desperately resort to extreme and dangerous measures such as illegal abortion pills, and several women within the UK have been prosecuted and sentenced for doing so. So, despite becoming law almost two centuries ago, the abhorrent 1861 Offences Against the Persons Act remains in place to this day: any abortion which does not adhere strictly to outlined restrictions is a criminal offence, punishable by life imprisonment.

Women in 1861 lacked basic human rights: they were treated as second class citizens, denied the right to vote, and could not even own property. This poses a pertinent question: in modern Scotland why are women’s reproductive rights stuck in the Victorian age, a time rife with sexism and prejudice?

This question occurred to Erin Campbell (Member of Scottish Youth Parliament for Midlothian North and Musselburgh) and myself, and after research we quickly discovered that UK abortion legislation is shockingly neglectful of human rights. Under the requirements of the 1967 Abortion Act, an abortion is only legal if:

These restrictions completely disregard a multitude of reasons why someone may wish to terminate a pregnancy. For instance, a mother’s ability to financially provide for an unplanned child is never considered, and if the pregnancy is a result of rape there is no clear legal justification for the mother to undergo an abortion, despite the potential mental trauma that may follow. Furthermore, the bizarre stipulation for two doctors’ signatures is completely dismissive of human rights. Not only does it significantly obstruct access to abortion services, leading to delays which increase the danger of the procedure significantly, but this requirement also places the decision entirely into the hands of doctors. This essentially removes a woman’s right to bodily autonomy altogether, because the choice to undergo an abortion is no longer the patient’s prerogative; the decision is purely medical, and therefore not really a choice at all.

Since October 2017 in Scotland, women seeking an early medical abortion are required to attend a clinical setting to take the first of two pills, with the second to be self-administered at home. During the Covid-19 pandemic, women are able to take both pills at home, following a telemedical consultation. While the relaxation of restrictions during Covid-19 is a welcome development, this is only temporary and the current legislation creates too many barriers to accessing abortion services, forcing people to risk their own safety as well as potentially face criminal prosecution, just to terminate a pregnancy. Even the United Nations Human Rights Committee have condemned legislation like ours, arguing that laws restricting abortions for medical reasons grossly violate the right to be free from inhumane treatment. The committee also criticised the UK’s failure to decriminalise abortion completely, demonstrating that access to safe abortion is a fundamental health right, and deserves a rights-based approach in law.

With 22 being the average age of women seeking an abortion, it is absolutely vital that young people are given a voice in this debate. But shockingly, myself and Erin’s consultations with our constituents revealed that young people are not only lacking a voice, but the majority of those asked were unaware that abortion was still a criminal offence under law. After opening conversations and handing out surveys to local young people, there was an overwhelming support for a change in law, but one question kept cropping up: isn’t abortion already decriminalised?

I can't blame anyone for asking this, because it was only the day before teaming up to submit this motion that myself and Erin learned that abortion remains a legally criminal offence in Scotland. We never questioned it before, because we never had to worry about the socioeconomic barriers, doctors’ signatures, or the associated stigma that many across the UK struggle with, let alone face the threat of criminal prosecution for undergoing a non-medically approved abortion. And as our consultations revealed, most of our peers were as ignorant of the harsh realities of Scotland’s outdated abortion legislation as we were. With this in mind we devoted time to educating ourselves and others: researching, initiating conversations; and spending several late nights with eyes glued to documentaries about the history of abortion law in Scotland, which only strengthened our resolve that change in legislation is desperately needed.

After our research, myself and Erin decided it was imperative to use our platforms to push for decriminalisation of abortion in law. So, as elected members of the Scottish Youth Parliament we decided to put forward a policy motion to provide us with a democratic mandate to campaign for change. We proposed our motion at the Scottish Youth Parliament’s virtual motion debates in March, which stated:

‘The Scottish Youth Parliament calls on the Scottish Government to decriminalise abortion, to ensure that provision is regulated in line with all other healthcare and to improve access to free and safe abortion services for all in Scotland’.

We are pleased to report this motion passed with an overwhelming 86% majority from our membership. This staggeringly positive response unveils just how outdated our current legislation is, and proves that Scotland’s young people no longer want their health rights controlled by an archaic law from the Victorian Era. Armed with this strong mandate, myself and Erin are keen to channel young people’s voices into the conversation, and using this policy we hope to push for total decriminalisation to ensure Scotland is genuinely giving women the right to choose.

Decriminalising abortion is far more than a piece of legislation. As well as providing women with legal protection, decriminalisation would minimise both legal and social barriers to accessing abortion services, ensuring that everyone in Scotland retains the right to safe healthcare, which revolves around basic human rights. Our current reality is that women’s bodies are being policed by a law that was written 159 years ago. For Scotland to truly become a country that values human rights, stands against sexism and takes healthcare seriously, our abortion law must be reformed: it’s time to stop criminalising, and start protecting.