Women and girls face signiﬁcant barriers to good mental and physical health. Historic lack of funding for, or professional focus on, health issues that disproportionately affect women, or affect women differently to men, can mean that these issues are not equally accommodated for in health services or awareness-raising initiatives. This anonymous guest blog explores gendered health inequalities and what progress is being made on bridging the gender health gap. 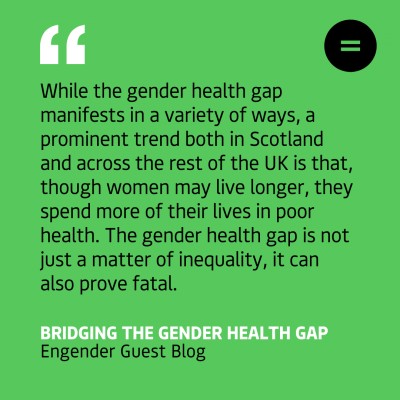 It took roughly six years of medical appointments before a tentative diagnosis of chronic pain – a condition that, by definition, is pain lasting longer than three months despite treatment. Part of the issue was that the pain, among other symptoms, had never really been treated; it was repeatedly misdiagnosed, from appendicitis to pregnancy, and continuously dismissed as stress or growing pains.

It was a strange relief to eventually be referred to an endometriosis specialist and women’s heath physiotherapist session, though the relief was short-lived – while I did receive some pain management, the former concluded that the pain did not appear severe enough to suggest the presence of the condition, nor warrant further investigation, and the latter prescribed mindfulness. Like many others, until recently I had never heard of endometriosis – despite its high prevalence rate and top ranking in the NHS’ 20 most painful conditions. I also found that, like many other people, my experience of healthcare was not unique. In recent years, there has been increasing awareness and recognition of such experiences as symptomatic of a wider issue: a gender disparity in medical research, knowledge and treatment that has amounted to a gender health gap.

The majority of data on gendered health inequalities is UK-centric, despite Scotland’s devolved healthcare system. However, while the gender health gap manifests in a variety of ways, a prominent trend both in Scotland and across the rest of the UK is that, though women may live longer, they spend more of their lives in poor health. The gender health gap is not just a matter of inequality, it can also prove fatal. According to the British Heart Foundation, despite the fact that women are twice as likely to die of coronary heart disease than breast cancer in the UK, gendered stereotypes of heart conditions as a predominantly male issue contributed to more than 8,200 potentially avoidable female deaths over a ten-year period; as women are less likely to recognise their symptoms, medical professionals are less likely to correctly diagnose such symptoms, and, even if they are diagnosed, women are less likely to receive the same level of treatment or medication as men. The gender gap is further exacerbated by intersectional racial disparities and biases in research and treatment; according to the latest MBRRACE-UK Report on maternal health, Black and Asian women have faced a much higher risk of mortality during or post-pregnancy than white women.

While the gender health gap is only recently gaining traction in the public domain, it is not a novel issue. As outlined in an interview with Dr Kate Young, public health researcher at Monash University Australia, not only has medical knowledge been historically produced by men, but for men; with clinical research predominantly focused on male concerns and bodies. Rather than rectifying the knowledge gap, Dr Young argues that it was filled with myths of female hysteria that have continued to persist, however consciously or unconsciously. Indeed, a 2001 study of gender disparities in the treatment of pain, one that appears just as relevant two decades on, found that women are more likely to “have their pain reports discounted as ‘emotional’ or ‘psychogenic’ and, therefore, ‘not real’” and, as a result, are less likely to receive adequate treatment. On the other side of the healthcare provider-patient relationship, the issue is compounded by societal stigma surrounding gynaecological symptoms, pain and health issues. For example, the Lady Garden Foundation found that “41% of women were too embarrassed to go to the doctor about a gynaecological issue, let alone talk to a friend”.

It is in large part thanks to such charities and campaigners that these issues have been brought to public attention, and amounted to at least some political progress. In Scotland, the government recently established a Women’s Health Group to tackle gendered inequalities in healthcare through a Women’s Health Plan. Similarly, the UK Government recently launched the Women’s Health Strategy: Call for Evidence, which seeks to utilise women’s own experiences of the healthcare system to address disparities.

There has also been tangible change for the public: Scotland has introduced free period products to tackle period poverty, a gendered obstacle that can affect further inequalities throughout life, and England is set to introduce menstrual wellbeing to the curriculum of primary and secondary schools, which will help to destigmatise menstrual health and enable people to better understand their bodies. However, Scotland’s recent establishment of a Gender Equality Index, which utilises a survey system to attempt to calculate gender inequalities, has proven to be an anomaly in the increasing recognition of a gender health gap: calculating from a limited number of respondents a score of 99/100 for gender equality in healthcare. Clearly, a more nuanced approach is required; not only to unearth and address the disparities that impact women, but the intersectional and cross-cutting gender biases that effect everyone’s experiences of healthcare. From the gender-stereotyping of eating disorders that inhibits their diagnosis in men, to gender-binary determined treatment plans that can prove life-threatening to transgender or non-binary people – patients are continuing to slip through the gender heath gap. It is not enough that everyone theoretically has access to healthcare in the UK, the healthcare system needs to be reconsidered with everyone in mind.