Juliet Swann is a policy and parliamentary consultant, Engender board member, and an expert on all things to do with participation in democracy. Here she takes a deep dive into the mechanics of the secondary legislation surrounding the 'family cap' and 'rape clause':

Last week Engender members and supporters deluged the House of Lords Secondary Legislation Scrutiny Committee with calls to review and report on the ‘family cap’ and ‘rape clause’ – policies which had been included in a piece of secondary legislation which had been laid before the Houses of Parliament without parliamentary debate and limited public consultation. That the Committee have raised concerns[1], written to the Minister to clarify those concerns and highlighted the regulations to the House[2], is largely down to that action.

But what is secondary legislation and what difference does the Committee’s action make?

The Houses of Parliament website describes delegated legislation (aka secondary legislation)[3] as follows:

“Delegated legislation allows the Government to make changes to a law without needing to push through a completely new Act of Parliament. The original Act (also known as primary legislation) would have provisions that allow for future delegated legislation to alter the law to differing degrees.

These changes range from the technical, like altering the level of a fine, to fleshing out Acts with greater detail; often an Act contains only a broad framework of its purpose and more complex content is added through delegated legislation.

SIs are normally drafted by the legal office of the relevant government department. Consultations often take place with interested bodies and parties.”[4]

The policy was announced in George Osborne’s Summer 2015 budget:

“2.103 Limit Child Element in tax credits and Universal Credit – The Child Element of tax credits and Universal Credit will no longer be awarded for third and subsequent children born after 6 April 2017. […] The Department for Work and Pensions and HMRC will develop protections for women who have a third child as the result of rape, or other exceptional circumstances.”[6]

How does secondary legislation usually work?

Now often (and to be fair most) legislation includes the power to make consequential provisions, to allow for just the kind of detail the quote above references. It can also enable change required by circumstance or indeed correcting mistakes or handling omissions. 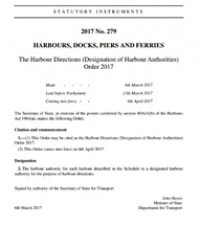 For example, another piece of secondary legislation introduced in March 2017 include The Harbour Directions (Designation of Harbour Authorities) Order 2017[7] (pictured). Pretty harmless, administrative stuff. (That’s it, all of it, right there).

You could be forgiven for thinking that the nature of The Social Security (Restrictions on Amounts for Children and Qualifying Young Persons) Amendment Regulations 2017 would mean they would receive full consultation and debate (as the Houses of Parliament quote above tells us ‘often’ happens).

However, another piece of legislation (the Social Security Administration Act 1992) provides that, if consequential provisions are made less than 6 months after the coming into force of the Act which first provided for them, then you don’t have to consult on or debate the new provisions.

“(5) Except to the extent that this subsection is excluded by an enactment passed after 25th July 1986, nothing in any enactment shall require the reference to the Committee or the Council of any regulations contained in either—

(a)a statutory instrument made before the end of the period of 6 months beginning with the coming into force of the enactment under which those regulations are made; or

(i)which states that it contains only regulations made by virtue of, or consequential upon, a specified enactment; and

(ii)which is made before the end of the period of 6 months beginning with the coming into force of that specified enactment.”[8]

“This instrument contains only regulations made under, by virtue of, or consequential upon, sections 13 and 14 of the Welfare Reform and Work Act 2016 and is made before the end of the period of 6 months beginning with the coming into force of those sections. Therefore, in accordance with section 173(5) of the Social Security Administration Act 1992, these Regulations are not required to be referred to the Social Security Advisory Committee.”[9]

So after all that you are left with effectively a brand new piece of legislation that is subject to ‘negative procedure’ which means that it becomes law without a debate or a vote in either House of Parliament. (As opposed to ‘affirmative procedure’ which requires both Houses to expressly approve the regulations).

And to some extent, what has happened here is just following the procedures in place, and it would be inefficient and disproportionate if every piece of secondary legislation had to be considered in detail.

How has the Secondary Legislation Scrutiny Committee responded?

Adherence to legal procedure only takes you so far when considering the nature of these regulations, which is why it is gratifying that the House of Lords Secondary Legislation Scrutiny Committee have taken the (limited) steps they have.

The Committee can draw special attention to specific delegated legislation for six reasons:

· it may inappropriately implement EU legislation

· there appear to be inadequacies in the consultation process which relates to the instrument.[10]

As noted in footnote 2, in this instance the Committee feel that “the regulations may imperfectly achieve their policy objective”[11]

The Houses of Parliament guide to delegated legislation tells us that “the Secondary Legislation Scrutiny Committee's role is to advise the House of Lords, and it is for the House to decide whether or not to act on the Committee's conclusions.” (emphasis mine). Very rarely are changes made or regulations halted. Indeed, a recent Select Committee report stated:

“23. While the House of Lords has previously resolved “That this House affirms its unfettered freedom to vote on any subordinate legislation submitted for its consideration”, it has rarely been the House’s practice to reject delegated legislation. In 2006, the Joint Committee on Conventions of the UK Parliament scrutinised various elements of relations between the two Houses. On delegated legislation, it concluded “that the House of Lords should not regularly reject Statutory Instruments, but that in exceptional circumstances it may be appropriate for it to do so”. The report then set out a non-prescriptive list of ‘exceptional circumstances’. It noted that in the absence of any exceptional or special circumstances, “opposition parties should not use their numbers in the House of Lords to defeat an SI simply because they disagree with it.””[12]

So whilst it remains to be seen what will happen The Social Security (Restrictions on Amounts for Children and Qualifying Young Persons) Amendment Regulations 2017, hope can be placed in that delegated legislation subject to negative procedure “may be annulled by a resolution of either House of Parliament”[13]. But sadly, it’s a slim hope that these opaque and complex procedures will prevent the implementation of the ‘family cap’ and ‘rape clause’.

Are there other concerns about this legislation?

As an aside, whilst researching for this post, I read through not just the draft regulations, but also the associated documents. And in these non-legislative notes the refusal to accept the human consequences of the regulations becomes clear.

The Explanatory Note attached to the regulations states:

The more detailed Explanatory Note which sits alongside the regulations, explaining in plain English what the provisions intend to do, includes, at Section 6 ‘European Convention on Human Rights’

“6.1 As the instrument is subject to negative resolution procedure and does not amend primary legislation, no statement is required.”[15]

By avoiding even these overarching safeguards, The Social Security (Restrictions on Amounts for Children and Qualifying Young Persons) Amendment Regulations 2017 may have obeyed the letter of the laws around delegated legislation, but the spirit of a procedure that is meant to be used to clarify and correct is being blatantly ignored.

To find out more and stay up-to-date with our work on social security, sign up here.

[2] Ibid “These Regulations are drawn to the special attention of the House on the ground that they may imperfectly achieve their policy objective.”

[12] Constitution Committee: Delegated Legislation and Parliament: A response to the Strathclyde Review