Guest post: #MeToo: just how tedious can it get? 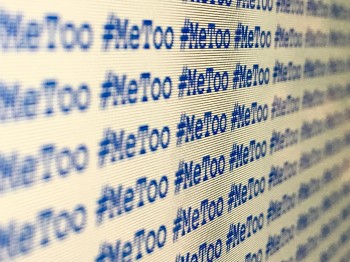 In the year since #MeToo became the most talked about hashtag on the internet, we've seen high profile men exposed as abusers, and women shamed for speaking the truth.

This guest blog from an Engender member who wishes to remain anonymous explores the legacy of #MeToo and the reality of violence against women in Scotland.

When I recently overheard someone on the bus ask, ‘What’s #MeToo anyway?’, to be told, ‘Oh, it’s just those tedious women … ‘, I wasn’t sure whether to be taken aback by his question or her response. How could they have, on the one hand, completely failed to register the hashtag of the year, and on the other, had quite enough of it?

I didn’t hear the rest of the conversation and don’t want to be too critical, but it’s made me think how quickly what seems like a movement or critical mass can become a temporary tweet, a momentary meme, and a scroll past on the way to something more interesting. Is it about social media locking people into 'bubbles' in which they only hear the views of people who agree with them? Is it because #MeToo originated with women in the media who may seem privileged, and their concerns not relevant to most?

Or is it symptomatic of a backlash; the pendulum swinging one way and then the other until it reaches equilibrium?

But it’s left me wondering, if #MeToo could be seen as ‘those tedious women’, what the tedium must have been like on 21 September 2017 (less than a month before the #MeToo hashtag went viral on 15 October)1 for the 336 women and the 310 children and young people who were living in a Women’s Aid refuge in Scotland2 waiting to get back into their own homes with protective orders or to be rehoused somewhere safely away from an abusive partner.

And it would have been pretty tedious for the 7,381 individuals (mostly women)3 who had to report a rape or sexual assault to Police Scotland in 2017/18,4 and then have to wait to see if there would be a prosecution, and if so, whether the jury would go for a ‘not proven’ verdict. What must it have been like for Ms M who had to wait through all that, and when the criminal justice system failed her, go to the lengths of raising (successfully) a civil damages action against the man who raped her?

And what about the (yawn) boredom experienced by the many women over the past year who silently endured an unwelcome look, or feel, or grope, or innuendo, or insult, or remark while on their daily commute, or at work, or as they went about their day. Not so much tedious as ‘routine and sometimes relentless’ according to a recent House of Commons Women’s Equality Committee report into sexual harassment of women and girls in public places.

And, spare a thought for the quiet loss and loneliness of those, often elderly, women who, for the whole of the last year and more, haven’t gone out much at all because of the fear of who they might encounter (known or unknown) if they stray from home.

Yep, that’s a pretty tedious way for women to have to live their lives.

2018’s anniversaries such as one year of #MeToo; 45 years since Edinburgh and Glasgow Women’s Aid first opened their refuges; and a hundred years since some women in Scotland were ‘allowed’ to vote, remind us that there’s an equal and opposite reaction to tedium, and of the energy that goes into protest, change, supporting survivors and eliminating violence against women.

See more about Edinburgh Women’s Aid’s 45 years of persistence at #45for45.

1 Tarana Burke first used the term Me Too in 2006 to raise awareness of the prevalence of sexual assault and sexual abuse. The hashtag went viral on social media in October 2017 when actor, Alyssa Milano, retweeted it.

3 Figures not disaggregated by gender. Prevalence shows most survivors of rape and sexual assault are women.