Today we're publishing the fourth in a series of blogs from two student placements Engender is hosting from the University of Strathclyde Applied Gender Studies and Research Methods course. These blogs explore women's representation and decision-making around women's equality in local authorities across Scotland. You can see other blogs in the series here. 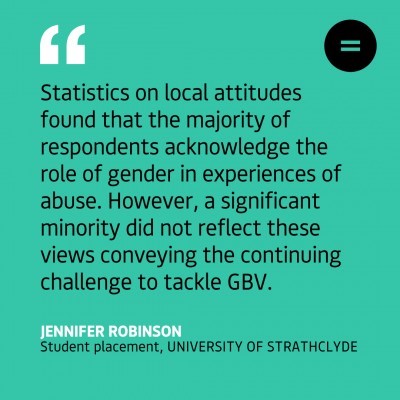 As part of my Msc Applied Gender Studies and Research Methods degree I have been on placement with Engender to investigate gender representation at the local authority level. My previous blog post highlighted the number of women councillors within Renfrewshire Council and Edinburgh Council. Since then I have been exploring key policies within each council designed to address gender-based violence (GBV). In this blog post I will outline some of Renfrewshire’s key gender-based violence policies.

In 2014 the Scottish government published “Equally Safe: Scotland's Strategy to prevent and eradicate violence against women and girls”. This strategy conveys the responsibility that all levels of society, including the local authority level, have in tackling violence against women and girls. In response to Equally Safe, Renfrewshire launched “Equally Safe in Renfrewshire: Renfrewshire’s No to Gender-Based Violence Strategy 2018-2021”. The strategy details the aim to establish Renfrewshire as a place where GBV is not tolerated and those affected by GBV are provided with support.

Key GBV statistics outlined in the document demonstrate the prevalence of domestic abuse and sexual crimes in Renfrewshire. Statistics on local attitudes found that the majority of respondents acknowledge the role of gender in experiences of abuse. However, a significant minority did not reflect these views conveying the continuing challenge to tackle GBV. Furthermore, a “ChildrenCount Wellbeing Survey” uncovered the prevalence of emotional control in teenage intimate relationships. Importantly, the strategy takes an intersectional approach by recognising the diverse impact of GBV on BME women, LGBT people, people with disabilities, refugee women, women with no recourse to public funds and women with complex needs.

A progress report of the GBV strategy is published annually during the 16 Days of Action (25th November – 10th December). I was curious to see these annual reports. However, trying to find council reports is challenging. After exploring the Renfrewshire council website, I came across a link which took me to Renfrewshire’s committee and councillor’s website. The website contains the various committees and their members, minutes from committee meetings and council documents and reports. Here, I typed “gender-based violence” into the search bar and found the GBV Strategy year 1 review and the GBV Strategy year 2 mid-year review. While reading these I uncovered an interesting policy. Under the GBV strategy, Renfrewshire launched a Domestic Abuse Policy for staff in 2019:

Renfrewshire was one of the first local authorities in Scotland to introduce a Domestic Abuse Policy for staff. The purpose of this policy is to demonstrate Renfrewshire’s zero-tolerance approach to domestic abuse. The policy has been developed in line with Equally Safe and complies with the Domestic Abuse (Scotland) Act 2018 which criminalises many forms of abuse, including psychological abuse and coercive control. According to the Human Rights Commission, 75% of people who experience domestic abuse are targeted at work, showing the importance of implementing guidance for staff.

Having read the GBV strategy and the Domestic Abuse Policy I was curious to know whether work had continued throughout the pandemic. I did some more digging and came across the Equality Outcomes and Mainstreaming Equality 2021-2025 report. According to the report, Renfrewshire meets or partly meets 34 out of the 38 priorities from Equally Safe. Under the Domestic Abuse Policy, e-learning was launched in 2020 to raise awareness of domestic abuse in the workplace and to provide guidance on supporting staff experiencing domestic abuse.

On a side note, the report reveals that a Menopause Policy is currently being developed. It includes awareness and training, paid leave provision and professional support. It will be presented to members for approval later in 2021.

Renfrewshire’s Local Transport Strategy has no mention of women or gender. This is despite differing transport needs between men and women. Women have different work patterns, use buses more often and make more complex journeys due to caring responsibilities. Safety is also an issue as sexual harassment occurs on public transport which can influence women’s decisions on travel (Engender, 2019). Furthermore, Renfrewshire’s Cycling Strategy does not mention women or gender either. The unequal division in caring responsibilities contributes to women cycling less than men. Safety is also an issue as female cyclists face sexual harassment and abuse from men on the streets (Guardian, 2019). These issues convey men’s dominance of public spaces and the prevalence of sexual harassment.