Guest Post: Hyper-sexualising queer women is a social injustice - it's time to change the narrative

Denisha Killoh is a proud member of the LGBT+ community with experience of fighting for change for marginalised groups. As Pride month draws to a close, she reflects on the need to take action to end discrimination against lesbians.

We live in a day and age where people are quicker than ever to call out injustices in society. Recently, we’ve seen an unprecedented rise of social activism, as a direct influence of social media, allowing anyone with a cause and a platform to fight for change.

We’ve seen this form of activism translate into campaigns to challenge institutions such as the legendary Black Lives Matter movement which calls out police brutality and systematic racism towards black people. The profound impact this influential movement had on both political and cultural landscapes across the globe is undeniable, popularising using online activism to inspire mass mobilisation for social change.

Earlier this month, a photo of Melania Geymonat and her girlfriend Chris went viral. The photo was taken following a homophobic attack on the couple by male perpetrators who aggressively tried to exploit the two women’s sexuality for their own gratification. The violence and oppression in this attack was abhorrent, providing a stark reminder that we have not yet combated the prevalent discriminatory attitudes towards Sapphic women in our society. 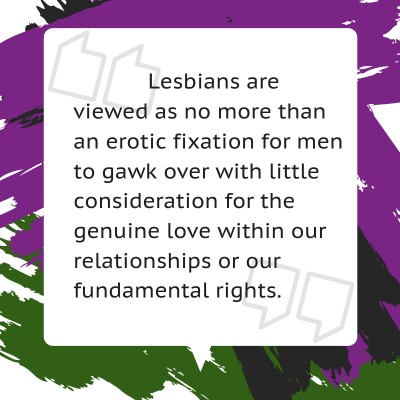 The media has been a major culprit of socialising these attitudes into society by regurgitating a narrative of lesbianism which is unrealistic and unrepresentative.

The normative idea of queer women is one which is constructed to be attractive to men. The majority of depictions of homosexual women solely feature cisgender feminine white women. We see it in films, music and wider pop culture – that femininity is exclusively intertwined with sexuality. This blatantly disregards that we come in all shapes, colours and sizes and teaches women growing up LGBT+ that unless they’re hypersexual and fit a certain stereotype, their place in society is inconsequential. This is something Chris herself criticised in regard to the media attention around her attack, highlighting that the world-wide press coverage her and her girlfriend received was not coincidental to the way they look.

The narrative of lesbianism being a hypersexual fantasy for men has been injected into society and has real life consequences as we have seen by the horrific attack on Melania and Chris. But if you look a little closer to home, the majority of queer woman can also tell you multiple accounts of when a man has questioned or belittled their sexuality.

Once it’s made aware that we’re LGBT+, we become plagued with questions picking apart our Sapphic experiences.

Some men will make bold claims around how they can somehow be a ‘cure’ for lesbianism, such as;

“But how do you know you’re a lesbian? You just need a real man, I bet I can turn you”

In the most extreme circumstances, this mindset has resulted in corrective rape. This term was first coined in South Africa, following the case of Eudy Simelane. Eudy was an out and proud lesbian and professional footballer for the South African national team who was brutally raped and murdered in a hate-crime by male attackers. Her death resulted in a national outcry, begging for the eradication of the discriminatory attitudes against lesbians stemming from male gratification.

Unfortunately, there is a whole culture of fetishized entitlement to our relationships from men. It’s not abnormal to be asked questions like;

“You have a girlfriend? That’s hot, can I join/watch?”

We’re no strangers to social activism, and we must use our tools of mass mobilisation to challenge the culture behind men who view lesbianism as merely a hypersexual fetish. It’s bizarre to me how we have allowed men to view Sapphic women as inherently erotic and for their own sexual gratification for so long when by definition, lesbianism does not include them. The unfair sense of entitlement to our bodies and sexuality must stop, and instead we must empower a narrative of lesbianism which is inclusive and representative of our community, encapsulating what it means to be a homosexual woman beyond just the sexual aspect of it.

The treatment of lesbians is a social injustice and we can no longer sit idly by whilst this discrimination continues. It’s time for this to change.