For the past year, Engender has been engaging in conversations with women across Scotland to find out their priorities for gender equality over the next ten years. This has led to inspirational conversations, innovative ideas, and a chance to engage in big questions around rights, opportunities and the changes we want to see in Scotland. One of the results of those discussions is our Gender Matters Manifesto, ‘Twenty for 2016’ - twenty key commitments we are asking for from political parties and candidates in the run-up to the Scottish Parliament elections. These twenty asks represent a wide range of issues which present barriers to women’s full participation in all aspects of life in Scotland. 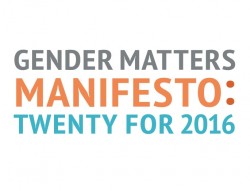 The Scottish Parliament elections in 2016 represent a huge opportunity for Scotland to lead the way on gender equality and take the bold action that is needed to truly address systemic discrimination against women. Women’s voices should be at the heart of a more equal Scotland, and this manifesto proposes commitments that parties can make to deliver on that ambition for equality.

All of the issues raised in the manifesto reflect the fact that that many women in Scotland face multiple discrimination. Fighting for gender equality means ensuring equal access to change for all women, including disabled women, women from black and ethnic minority communities, refugee and asylum seeking women, older women, lesbian bisexual and transgender women, and women from deprived and rural areas. Political parties in Scotland need to recognise that for gender equality commitments to make a real difference to women’s lives, they must take action to tackle the barriers faced by women from all backgrounds.

The democratic discussions surrounding the independence referendum gave people in Scotland the opportunity to engage with politics in a way many had never experienced before. It allowed individuals and groups to think imaginatively of how Scotland could become a fairer nation, regardless of the constitutional outcome. While there are still ongoing discussions around the exact terms of the Scotland Bill, and some uncertainty remains over new powers, this manifesto represents clear ways that Scotland can enact some of that vision for a more just country.

We believe that all of the asks included in this manifesto are, with political will, achievable over the next parliamentary term. We call on all political parties and candidates in Scotland to include the commitments within it in their own manifesto. We will be working across the political spectrum so that parties’ campaigns and commitments reflect the fact that gender matters in these Holyrood elections.

Find out more and read the full manifesto here.