Gender Matters and #GenerationEqual: Shifting the needle on equality for women and girls 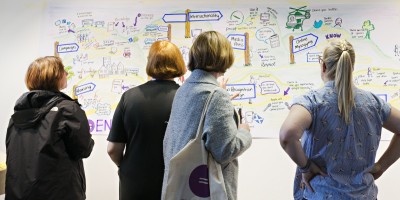 Eighteen months after our Scotland's Feminist Future conference and the launch of our Gender Matters Roadmap, our Executive Director Emma Ritch considers positive progress alongside the recently released first set of recommendations from the First Minister's National Advisory Council on Women & Girls.

Amid the weekly grind of Scottish Parliament committee sessions, working group meetings, consultations launching and closing, and streams of papers flowing in and out of the office, it’s a challenge for a policy and advocacy organisation like Engender to keep our focus on what lies over the horizon: a better world for women and girls.

Feminist organisations across the women’s sector in Scotland often have a clear strategy for what we’re working on, and a strong sense of our ultimate goals, but filling in the middle can be quite challenging. Over three years ago we launched a participatory process to create a roadmap for women’s equality in Scotland, called Gender Matters. Women’s organisations, women’s groups, and women from across Scotland threw in ideas at events, online, and through surveys and evidence calls. We sifted what came to us, and grouped women’s thoughts, evidence, and ideas for change. 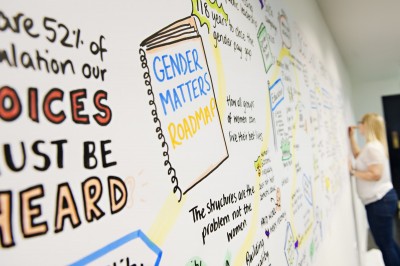 Gender Matters has now been out in the world for eighteen months, and this week gave us cause to celebrate at the way the ideas from Scotland’s feminists and feminist organisations have found their way into the heart of Scottish Government. I am privileged to be a member of the First Minister’s Advisory Council on Women & Girls, which is a group of 17 women and girls with a wide range of experiences and perspectives. We are collectively tasked with producing recommendations for the First Minister on how we can shift the needle on equality for women and girls.

At an event in Edinburgh on Wednesday, Nicola Sturgeon responded to our first report and the recommendations within it. In our first year we’ve been considering ‘attitude and culture change’, and how to transform Scotland’s commitment to dismantling misogyny. One of our key recommendations was for the learning from public attitudes work by Rape Crisis Scotland, Amnesty, and Poverty Alliance to be augmented by a ‘What Works?’ Institute to develop and test robust, evidence-led approaches doing this. We also want to see ‘beacon’ public bodies demonstrating systemic changes in approach to gender mainstreaming.

But in addition to building evidence about how to change attitudes, you can change attitudes by changing reality. And so I’m particularly excited by the raft of proposals that have been developed by the women’s sector over time. These include recommendations to create a world-leading process for complainers of sexual violence; criminalise misogynistic harassment; and develop a model that ensures women experiencing domestic abuse have access to expert legal advice and legal aid. Establishing a resourced media body to hold the Scottish media to account. Incorporating the UN Convention on the Elimination of All Forms of Discrimination Against Women (CEDAW) into Scots Law. Providing 50 hours per week of funded, good quality, and flexibility education and childcare for all children between six months and school. Create legislated candidate quotas for the Scottish Parliament elections, to improve the gender balance in our national parliament.

These ideas are in Gender Matters, and along with other recommendations are bold, creative and system-changing. The First Minister welcomed the whole report and promised a detailed response. She referred to the CEDAW proposal as ‘timely’, committed Scottish Government to getting into a discussion about transfer of powers with UK Government so Scotland could introduce ‘Daddy months’ and candidate quotas, and said that the discussion about the future of childcare would take our recommendation for an increase in hours as ‘a central part’.

We’re looking forward to seeing Scottish Government start to take action on this exciting set of recommendations. After all, there will be another set to chew through by the end of 2019.
Posted on February 1 2019 at 09:59