Dr Sophie Cartwright is a former volunteer at the Unity Centre in Glasgow and a regular contributor to BrightGreen. Here she writes on why 'safe return review' and deportation is cruel and dangerous - and will disproportionately impact women and girls who have fled gender-based violence. 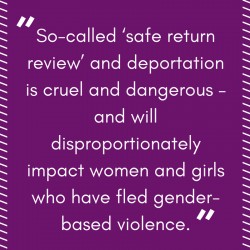 The UK Home Office has announced that it will deport refugees after 5 years if it deems this safe. This policy has a complicated backstory, but here’s the simple version: After five years, refugees can apply for permanent residence. With important exceptions, this used to be a fairly straightforward process, so that those offered refugee status could start to build a new life in the UK. They had some expectation of being able to settle here, and thus light at the end of the tunnel. Now, the home office will conduct a ‘safe return review’ and, if they decide that a refugee no longer needs international protection he or she will be deported. Refugees will effectively have to repeat the trauma of their asylum applications – and must live under threat of deportation for even longer. Ultimately, many will be dragged from communities where they have friends and family and thrust back into danger.

Immigration barrister Colin Yeo has suggested that this policy could disproportionately affect female refugees. Why? The Home Office has a list of indicators that it might be now safe for a refugee to return to their country of origin. One of them is a ‘change in personal circumstances.’ This will hit hardest those whose need for protection is mainly based on personal circumstances – such as women who have fled FGM, domestic abuse, and forced marriage (and LGBT refugees).

In asylum claims, the burden of proof in practice ends up on the asylum seeker. The same will go for ‘safe return reviews’. Gender-based violence is often interpersonal, but interpersonal violence, and risk of it, are frequently difficult to demonstrate, partly due to a culture of disbelief; we see this played out in Scottish courts in the context of sexual violence all the time. It will be even harder to prove a continued threat of such violence. This means not only that a disproportionate number of female refugees are likely to be deported – cruel even if they were by then safe; but also that the Home Office is disproportionately likely to disregard very real continued danger to women and girls.

Broad, geo-political realities, and laws discriminating against you, are rarely enough to prove the need for international protection, and they are certainly not in these kinds of cases. An asylum seeker must demonstrate how macro-politics is imprinted on her own life. She must delve into personal circumstances in painful detail.

Frequently, this means describing and demonstrating family circumstances and community dynamics. For instance, if a woman is fleeing forced marriage, she might need to demonstrate threats and violence from family and potential in-laws, and sometimes also the concrete behaviour of local law enforcement officials. She also needs to show that it wouldn’t be safe for her to go to a different town in her country of origin. Among other things, to demonstrate that her family would actually pursue her to another city, she must show that they care about this a great deal and will expend time, energy, and money on it. It is quite easy for the Home Office to respond that her persecutors may have lost interest. Reasons for refusing an asylum claim can minimise the significance for long-term safety of key interpersonal events – threats made and beatings suffered. There is a very real risk that, after five years, this becomes a standard refrain.

The realities of care responsibilities

The process of ‘safe return review’ could also affect people with care responsibilities most, in a couple of ways.

Women find it harder to leave their home when they are in danger, partly because they tend to have less physical and financial autonomy than men. Crucially, they are also more likely to have care responsibilities – for children or elderly relatives – that tie them to a particular place, no matter what the danger. These ties might draw anyone back, even if they know this is a risk. Therefore, another government indicator of safety (not entirely new) also impacts women disproportionately – having returned to your country of origin.

And what about children with you in the UK? If any of your dependents have returned to your country of origin, this too calls your own continued danger into question. Clearly, this overwhelmingly affects those with dependents. It is particularly hazardous for women who have fled gender-based violence with male children. It might genuinely be safe for a boy to go to his family home, but not for his mother (the government itself acknowledges that some countries that are safe for men are not safe for women).

It is too early to tell how exactly this development and new approach to refugee law will be enacted – but these are some of the directions in which points, and that’s worrying.

A petition has been launched calling on the UK Government to end the Safe Return Review policy. You can sign it here.