Women's representation in politics is incredibly important. Only 33.9% of Scottish MPs elected in the last Westminster General Election were women. In the run up to the 2017 General Election on June 8, we'll be hosting a series of blogs from women involved in political campaigning. Today's blog is from Pam Duncan-Glancy, who is standing as a candidate for Scottish Labour in Glasgow North.

Time for a different kind of MP 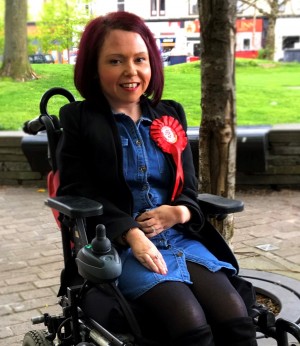 Standing among men, debating men, being photographed with men and being bossed about by men (although, as you might imagine, I pay limited heed to that part!). This is how my life is right now. I am the only woman standing for election in Glasgow North and the only wheelchair user standing for election in Scotland. You’d be forgiven for thinking I was writing this in the 1950’s. But I’m not. It’s May 2017.

Women make up half of the population, and 1 in 5 people are disabled. Yet our Parliaments and council chambers look nothing like this. Shocked? Well, when you consider what we’re up against, it’s no surprise really.

I announced my candidacy on social media, as many people do these days. #PickPam was my call to action and this was the video I used. Fighting for equality and human rights, from the benches of Parliament, has been a near lifelong ambition for me. The moment I published that video, I was filled with pride. But it took a matter of minutes for a troll (a man) to say ‘bit sick of Labour using the handicapped to get votes’. Some faceless keyboard warrior who thought it was ok to write bile…but who wouldn’t have the bottle to say it eyeball to eyeball. I have a rule about stuff like this. In short, I ignore trolls. But this was different. This time I was standing for election. I want to win for Glasgow North, I want to win so that we can have a Government focused on public services, equality and human rights. But there’s another reason I am standing. I want to show other disabled women, across the UK, that they can, and should be heard.

As a disabled woman, I am often misunderstood and underestimated. Oppression, discrimination and inequality make that so. So I wasn’t surprised that my troll assumed I was being used by my party and that the only reason anyone would pick Pam would be out of pity. He’d underestimated me, but he wasn’t going to misunderstand me. I replied: 1. The word you’re looking for is ‘disabled’ and 2. I’m standing as the best person for the job, who happens to be a disabled woman. As the only woman standing in Glasgow North and the only wheelchair user in the election, it was clear I was going to have to work doubly hard to prove my worth. I had a duty to stand up to him. And so, I broke my rule.

In doing so, I set out my stall from the top – I’m a fighter.

I stood in this election because Parliament needs a different kind of MP and because Glasgow North needs a fighter. Too many people are forced to turn to foodbanks, social care is in crisis and our public services are on their knees. Parliament needs an MP who will put equality and human rights first because this can’t go on and because that MP know first-hand why it matters.

For that, I ask people of Glasgow North to pick Pam.

Pick a candidate whose party created and will defend the Human Rights Act. Pick a Scottish Investment Bank, pick a ban on zero hour contracts and a minimum wage of £10 an hour. Pick a National Care Service free at the point of delivery and an increase in carers allowance. Pick an end to the public sector pay cap, pick a strong Scotland as part of the UK and a Brexit deal that puts jobs and equality first. Pick an accessible & affordable nationalised railway, new homes & rent controls. Pick a properly funded, publicly owned NHS. Pick justice for the WASPI women, pick pay equality and pick a triple lock on pensions. Pick Pam.

I have seen the worst of our society; hate crime, poverty, inequality. But I’ve seen the best too. I have the passion to fight this, and the faith in people to believe we can win this fight. It’s time Parliament had a strong, disabled woman representing Glasgow North. Pick Pam.