Women's representation in politics is incredibly important. Only 33.9% of Scottish MPs elected in the last Westminster General Election were women. In the run up to the 2017 General Election on June 8, we'll be hosting a series of blogs from women involved in political campaigning. Today's blog is from Nighet Nasim Riaz, who recently stood as a candidate for the SNP in the Glasgow City council elections. 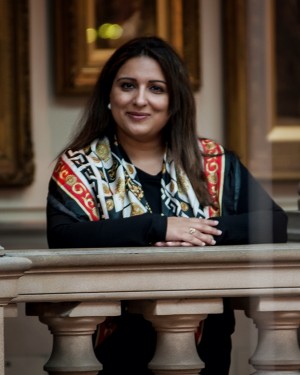 As a woman of colour, born to Pakistani parents in Birmingham UK, I became politically active for the first time in 2011, joining the SNP as its policies reflected my ideology of a fairer, more equal and socially just nation.

I am an activist, and have worked alongside many other activists who have now gone on to become MPs, MSPs and Councillors throughout Scotland.

As in any party, if you work hard and consistently, you are noticed and asked to take on a more prominent role within your local SNP branch, your Constituency branch and within other structures in the party.

I am in a party where the First Minister is a woman, and is the MSP in the constituency and branch in which I am active, which is empowering to watch her get on with ‘the day job of running the country’, with her gender balanced cabinet. The SNP Westminster candidate Alison Thewliss who has persistently highlighted and fought tirelessly for the abolition of the two child tax credit policy and rape clause, and against the closure of jobcentres in Glasgow in her 2 year tenure at Westminster. For many of us, both Nicola and Alison are role models, principled and hardworking in the roles into which they have been elected for the people of Scotland.

As the branch Organiser I have helped organise the delivery of materials, canvassing of the ward, and help other office bearers put together social and fundraising events. This has made me develop and deploy skills such as negotiation and delegation and working with lots of different people from different social backgrounds and is a great learning environment where I thrive as I feel I am developing my skills base and forming relationships with my fellow branch members, the SNP and local communities.

I have worked with the SNP Women and Equalities Convener and Organiser Convener to encourage more women, those with disabilities, LGBTi, and ethnic minorities to become more active within the political spectrum and put themselves through the process to stand for selection and election. To have conversations on how to run campaigns, the importance of local knowledge and mentoring to ensure you are delivering a consistent message in line with your party manifesto to represent your constituents, and more importantly listening to your constituents. Having strong leadership in particular from the women who hold party convenership gives women further down the party infrastructure the impetus to become more vocal and move on from being just ‘talking shops’ to making sure our words are actioned and taken on board by the party’s National Executive Committee.

As the Secretary for SNP Friends of Palestine, which is a powerful forum asking for the human rights of the Palestinians to be recognised by Israel, has been a group I have been involved in and where I have met more women role models who have encouraged me to become more vocal such as Philippa Whitford and Sandra White who stand up for the rights of others oppressed across the world.

There are many opportunities within the party which the party and affiliated organisations could highlight better, and it is up to the individual to become more active within these groupings if they wish to help as an activist and if they wish to pursue a political career.

As someone who has recently stood as a candidate in the Glasgow City council elections and didn’t get elected, it has given me the opportunity to reflect on how I can do better next time if I decide to stand and share that knowledge with the party to enable a discussion to take place. I am proud to stand behind policies where women are empowered to return to education through free tuition, return to work where childcare hours for children in nurseries have been increased to 30 hours a week, and where we are put forward council candidates of whom 54% were women, and where our party actively encourages public sector and third sector organisations to use a 50:50 model for gender representation within their board structures.

As a party we not only practise gender equality within our own infrastructure, within our Scottish Government cabinet, but also encourage and facilitate more opportunities for women in the day to day aspects of their lives.