Four things you need to know about CEDAW 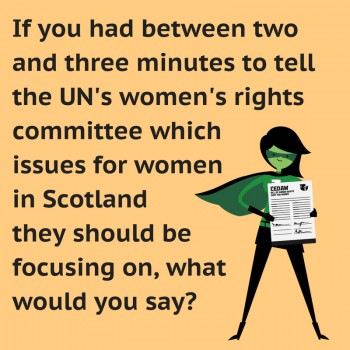 This week, Engender's Executive Director Emma Ritch is in Geneva at the pre-sessional working group of the CEDAW Committee. To help you get your head around the mystery that UN Committees can appear to be, here are four things you need to know about CEDAW.

If you had between two and three minutes to tell the UN's women's rights committee which issues for women in Scotland they should be focusing on, what would you say? It's one of the odder tasks in women's rights advocacy, and one that we'll be taking on in Geneva in Monday.

1. CEDAW is the Bill of Rights for Women

The Convention for the Elimination of all forms of Discrimination Against Women (CEDAW) is a UN Convention that was developed at the tail end of the 1970s, and was ratified by the UK Government in 1986. Known as the international bill of rights for women, its articles include equal protection for women and equality of access to education, the law, political power and representation, economic resources and social security, and a whole raft of other areas of life. Like other international obligations, its legal status is somewhat murky when it comes to individuals. You can't go along to a Sheriff court in Scotland and assert your CEDAW rights, but courts can consider it when they're making some types of decision (for more info on how CEDAW could help women's rights be realised in Scotland, see our report here.)

The UN CEDAW Committee itself can also sit as a court of inquiry when systemic breaches of rights are taking place, or a kind of court of last resort when individuals have exhausted every legal remedy in their own state. There are some examples of this below.

2. CEDAW has a whole Committee of people to do its work

As well as a Secretariat that consists of a handful of overworked officials, the CEDAW Committee exists to make the treaty live in all of the UN states that have ratified it. They are unpaid jurists, senior academics, and gender experts from around the world, who have been nominated according to the UN's regional selection process to be broadly representative of the different groups of nations within the UN. Most of them are women, but the occasional man has popped up on the Committee.

They do four main things:

Their CEDAW role is rarely the only thing they do, and they only meet face-to-face as a Committee a couple of times a year.

3. What happens during a CEDAW examination 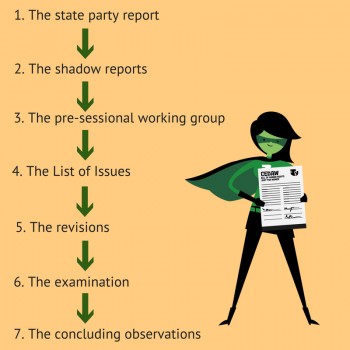 Every five or so years (the Committee is very backlogged, and has been for at least ten years) the Committee brings states in front of it to examine their progress against its articles. From beginning to end, the state party reporting to concluding observation process takes about 2.5 years, and involves a number of key stages:

The CEDAW Committee requires a report, known as the 'state party report', which sets out gender-disaggregated data, descriptions of policy, legislation, and programmes, and picks up on issues the Committee was concerned about in its previous examination.

To contextualise what it's told by the state party, the Committee accepts shadow reports from civil society organisations, which often differ sharply in views and emphasis from the government's version of events, and from National Human Rights Institutions*. Engender produces a Scotland report, and also participates with other women's organisations in the production of a four-nations report. The UN's processes are theoretically very inclusive of civil society perspectives, even if its processes and spaces can sometimes be inhospitable and awkward to navigate.

The Committee then produces something called a List of Issues, which is a set of questions and areas of clarification that they then write to the state party about. The state party (in our case, the UK Government) then writes back to the Committee with some answers and evidence.

There is a final opportunity for civil society organisations to feed in substantive thoughts, by revising its shadow report to start to set out recommendations. For those civil society organisations who can get to Geneva, they can provide final verbal reports in a (more genuinely) informal lunch meeting with the Committee on the eve of the examination. This meeting is almost always pierced by the Nazgul-like wails of the peacocks that roam the UN's estate.

The examination itself it like a long Committee hearing. The UK Government representatives, usually numbering around fifty with additional civil servants beamed in by videolink, open with a statement. The Committee members then ask searching and prosecutorial questions in batches, concentrating on their 'own' articles in the order they appear in the convention, with replies coming from individual civil servants with responsibility for different policy areas. Scottish Government is usually represented by a couple of civil servants. At the most recent CEDAW examination there was no representation from Welsh Assembly Government or the Northern Irish Executive.

During the examination process civil society organisations can challenge the statements being made by civil servants by providing their own evidence directly to Committee members, through emails, notes taken onto the floor, or side conversations.

Mere days after the examination ends, the Committee produces a set of draft 'concluding observations' that set out areas where action needs to be taken by the state to address outstanding violations of rights. The rapporteur with responsibility for the UK examination, who is a Committee member, will meet with civil society organisations one final time to hear final thoughts on what should be in the concluding observations.

This list of concluding observations produced by the Committee is a hugely important advocacy tool for Engender and other equality advocates. We try to maximise the extent to which the specific laws, programmes, policy, and circumstance of Scotland are understood and referenced in it, so we can use it when we talk to policymakers.

What this international Committee of experts says about women's rights and equality in Scotland and the UK should be important to all the governments of these four nations. We try to ensure that it highlights critical issues for women in Scotland and nudges those with the power to act to advance women's equality.