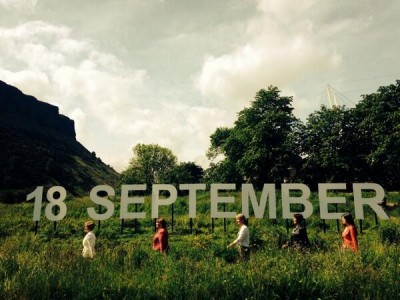 Events like the first all-female cabinet meeting with the women's sector are generally more about symbolism than they are about substance. Sceptics have even made the point that the women of the Scottish cabinet only control 12% of the Scottish budget.

Nonetheless, the visual of five female ministers (the four cabinet secretaries and Aileen Campbell, Minister for Children and Young People) setting out their vision for Scotland was an arresting one.

Nicola Sturgeon's opening speech wasn't particularly gender-focused, but it did tick off a number of gender-inflected issues, in the form of the minimum wage, anti-discrimination law, and women on boards.

The post-speech question session was chaired by Gina Davidson, Associate Editor at the Edinburgh Evening News. She had the unenviable task of trying to encourage brevity in a gaggle of senior politicians, which left the final question session on violence against women unfortunately short of time.

One of the first questions, from Scottish Women's Budget Group convener Angela O'Hagan was on economic models, and the Scottish Government's proposals to lower corporation tax in an independent Scotland. "Whither redistribution?" asked Dr O'Hagan. The Deputy First Minister refused to yield on corporation tax, but did agree that there was a "lot wrong with the economic model we have just now", committed that iScotland would not be a low-wage economy, and said that having Scotland's hands on the levers of economic power would not bring about "business as usual".

A flurry of questions on the implementation of the childcare proposals followed, and Aileen Campbell agreed that a review of the childcare workforce was needed, to ensure that the planned expansion of delivery did not create more underpaid and undervalued jobs. The point that offering primary-school-day quantities of provision will still leave mothers with full-time jobs needing wraparound care does not appear to have been picked up.

The incoming and outgoing NUS Scotland women's officers, Stacey Devine and Vonnie Sandlan, managed three questions between them, and received assurances that the right to a free education would be enshrined in the constitution. Other answers encompassed the Wood Commission's recommendations on occupational segregation, the 'implementation' of equal pay law, and a commitment to a cross-cutting violence against women strategy.

We used Engender's question to ask about political quotas, and also about the involvement of women in the post-indy negotiating teams and in the constitutional convention. As reported in the Herald and elsewhere, Ms Sturgeon averred that women would be "equally represented around the table" in the process of developing the constitution, and went on to say that the constitution would incorporate economic and social rights.

The panel of Ministers were clear in their view that political temporary special measures, including quotas, should be in the hands of the political parties themselves, and noted that they had been on the "losing side of debates within the SNP" on women's representation.

A useful morning out?

It was helpful to hear Ministers' thinking on the possible future for Scotland, and to hear how gender fits into that picture. Engender's point, in thinking about the referendum, has always been that measures to bring about women's equality are equally possible under the two constitutional arrangements we are currently choosing between. The disruption that independence would bring, and the opportunity to create new institutions and processes, would provide a number of opportunities to embed gender equality, but that will be a considerable challenge.

Whatever the outcome of the referendum, the struggle to mainstream gender equality and to fully realise the rights of women will continue. Cross-party work hasn't been abandoned, but there will be a certain relief to life after September, in which talented women from across the political spectrum come back from their respective campaigns to work together on the wicked problem of women's inequality.